Zcash Leader of the Day, Other Cryptos Lose Momentum 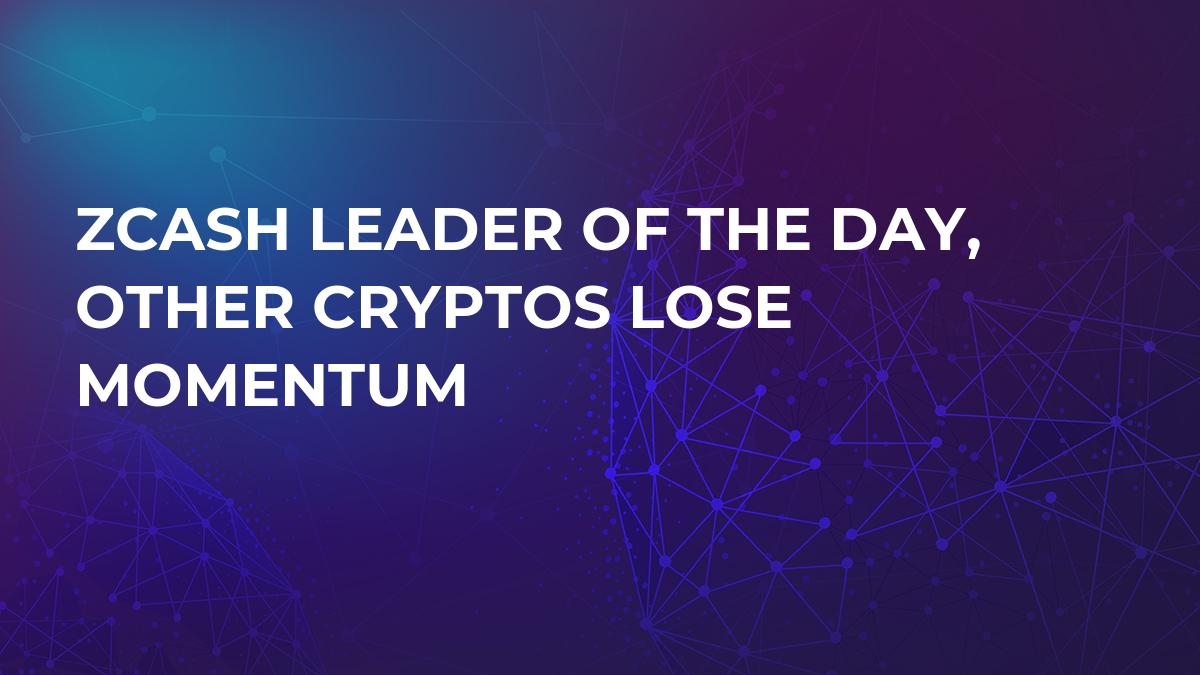 Cryptocurrencies from Top 20 market capitalization show negative dynamics as a whole except Zcash, who is the true winner in the past 48 hours.

Zcash will be listed at Gemini exchange (the brainchild of twin Winklevoss) as the company received the appropriate approval from NYSDFS. The cryptocurrency surged significantly following this event on Monday. Gemini became the first exchange to accept Zcash as an asset for trading.

Winklevoss brothers think that Zcash is promising due to its privacy, which is the main advantage of the cryptocurrency as compared to Bitcoin. ZEC/USD’s price increased by 47 percent on Monday. The cryptocurrency still develops its progress as it added another 2.34 percent in the moment of writing.

The general fundamental background seems to be positive as police found nothing wrong during its investigation at Upbit exchange. It should be reminded that South Korean police had a raid at Upbit headquarters last week. This event resulted in a sharp decline of nearly $50 mln in market capitalization as investors had fears about the exchange’s activities.

The most important event currently is the Consensus 2018 Conference, which attracted not only Blockchain experts and adopters, but also some officials including the Head of St.Louis Federal Reserve James Bullard. The Conference has not been without sensations as Vitalik Buterin refused to participate there.

Those events seem to have no significant influence on fluctuations currently. However, they may affect prices later.

Zcash has reached its all-time highs on Tuesday as ZEC price almost touched the 390 level. Then, we had a correction towards the support area at 325. The volatility is still very high as many market participants are interested in this coin.

Technically, ZEC price is testing the resistance area at 366 in the moment of writing this review. Depending on the results, ZEC/USD may have the following possible scenarios:

As for the daily chart, ZEC/USD looks pretty good there as ZEC price has left the Ichimoku cloud with momentum and continues to rally. Zcash is above the ascending trend line but may correct towards it in the nearest future.

Bitcoin jumped off its newly established support area at 8,130 and tested the resistance area at 8,366. BTC price is above the level at the moment of writing, but it is early to say whether BTC/USD has already crossed this level or not. There are no candlestick signals currently. Bitcoin price is far from the Ichimoku cloud but makes attempts to meet the indicator in the nearest future.

The possible scenarios for BTC/USD are the following:

Bitcoin stays within the Ichimoku cloud on the Daily chart. BTC price has almost reached the lower border of the formation and seems to have chances to change the direction.

Ethereum crossed the support area at 695 today, but its further decline was limited as the price managed to make a half distance to the next support area and reversed. ETH/USD crossed the 695 resistance area from below and jumped over the line, developing progress. Ethereum is close to the lower border of the Ichimoku cloud and it seems like bulls want to test it and to go higher.

ETH/USD is fluctuating above the Ichimoku cloud meaning bulls are still in control of the situation on the Daily chart. However, Ethereum stays below the ascending trend line.

Bytecoin is a true “loser” of the day from the top 20 as it declined 11.71 percent in the past 24 hours. Nevertheless, bulls seem to take the initiative in their hands as the managed to move BCN/USD higher and the currency pair is above the descending local trend line currently.

Bytecoin is above the support area at 0,0100. BCN price is below the Ichimoku cloud as well. The possible scenarios for BCN/USD are the following:

Bytecoin is above the ascending trend line as bulls are still in control of the situation. However, BCN/USD arouse the suspicions as its fluctuations currently are similar to “Pump&Dump” strategy.

Bitcoin Cash is in second place after Bytecoin as its price declined 11.69 percent in the past 24 hours. The currency pair reached its support area at 1,224 and jumped off it starting a correction at least. BCH/USD has already managed to break through the descending trend line and was stopped by the resistance area at 1,308. We have a clear Shooting Star candlestick here which is worth considering when making decisions.

The possible scenarios for BCH/USD are the following:

The currency pair is close to the support area at 1,308 on the daily testing this level. If successful, BCH/USD may decline towards the next midterm support at 995. However, bulls still have the power to change the situation and in this case, the price is above the grow, jumping off the current support area.

Stellar is also one of today’s anti-heroes as its price declined for 11.61 percent in the past 24 hours. XLM/USD reached the support area at 0.3189 and jumped off it towards the resistance area at 0.3377. The currency pair has also crossed the descending trend line in passing. There is a Shooting Star candlestick pattern in the moment of writing.

The possible scenarios for XLM/USD are the following:

As for the daily chart, Stellar is close to the Ichimoku cloud in the moment of writing. We have a downside midterm tendency, but the situation is still unclear.

NEO has lost about 11 percent in the past 24 hours and it closes our top five bigger losses from top 20 marketcap cryptos. NEO/USD reached the support area at 59 today and jumped off towards the resistance are at 62. The volatility is below average today and there is no tendency currently. NEO price is far below the Ichimoku cloud.

The possible scenarios for NEO/USD are the following:

AS for the daily chart, Neo seems to leave the Ichimoku cloud, but without any significant momentum. The midterm situation remains unclear.