Katya Michaels
The prominent researcher, investor and speaker brings a practical approach to his vision of the future 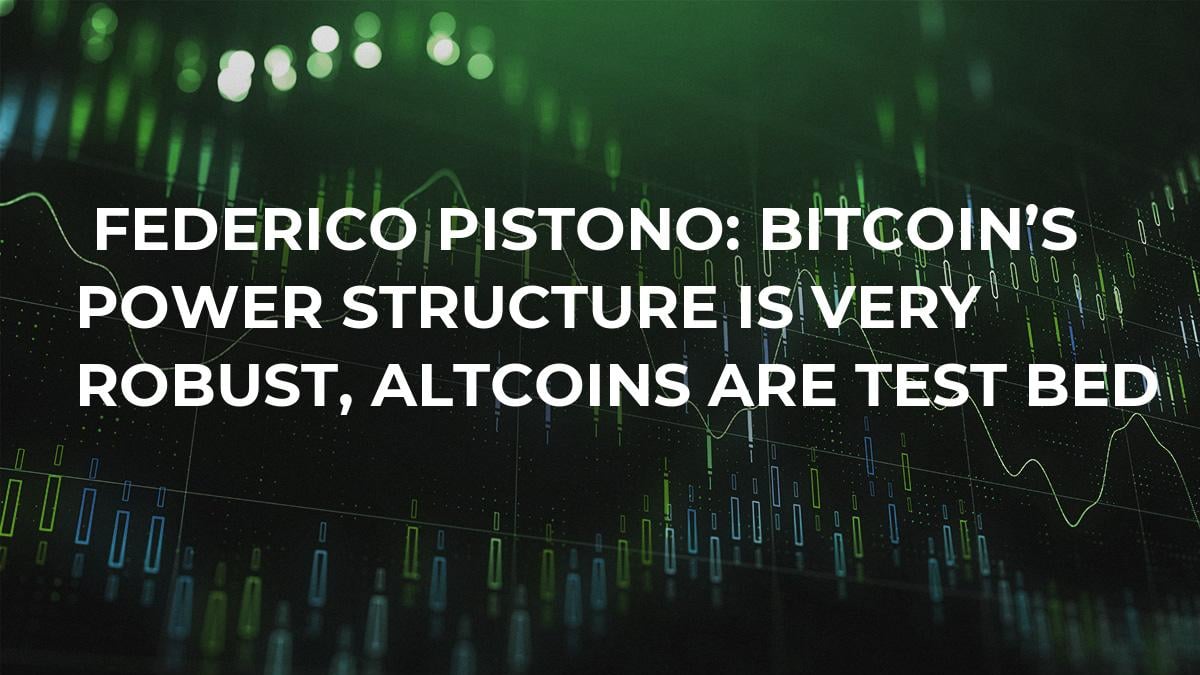 After Google’s public demonstration of its AI assistant some two weeks ago, waves of shock, denial and censure rippled through the media. Audiences seemed unprepared for the progress made by artificial intelligence while they weren’t looking.

Federico Pistono, however, foresaw this moment, and the many similar moments we will undoubtedly witness in the near future, as far as six years ago, in his bestselling book "Robots Will Steal Your Job, But That's OK: How to Survive the Economic Collapse and be Happy."

In addition to researching the societal implications of artificial intelligence on the evolution of society, Mr. Pistono is an entrepreneur, investor, startup founder, public speaker and most recently, Head of Blockchain at Hyperloop Transportation Technologies- a company that is working on the first supersonic land transport. He took a few minutes out of his busy schedule to speak with CryptoComes about Bitcoin’s prospects, surveillance states and why he might take some time before writing another book.

Katya Michaels: Among all your diverse interests and achievements, what is the thread that ties it all together? What would you say is the unifying theme of your research?

Federico Pistono: Probably it’s trying to understand complex systems. They are very easy to disturb and usually when you do, you disturb them for the worse.

No one understands complex systems really, and very few people have any idea of how to tweak the variables just slightly to improve the whole.

In a sense, for me, it's about trying to understand the laws of the universe on different scales.

KM: Obviously, your exploration of these subjects began before cryptocurrencies and  Blockchain technology proliferated, probably even before the release of Satoshi’s paper. When did you first discover Blockchain and how did it fit into your research vision?

FP: Cryptographic hash functions have been known for 20 years. When I studied math in university, I learned about the traveling salesman problem, which is essentially impossible to solve. When I read Satoshi’s white paper, I found that there was some circumvention mechanism.

I didn't even understand the implications of it on the economic scale, at the time. There wasn't a lightbulb moment, it was more of a process of piecing things together and trying to envision some of the implications.

For example, when we could only do banking through paper, you couldn't scale as much because it's an organizational problem. Computers allowed for the creation of worldwide banks and online payments, but then it stagnated and hit the limit.

After PayPal, there wasn’t really any innovation in the banking sector, that was as big as it could get with just the Internet. And PayPal didn’t really change anything in terms of the structure of power. It allowed more fungibility and more access to small credit for people without bank accounts, perhaps, but that was about it.

Now with Blockchain, you change everything– literally. Let's say you live in a country that you think is stable, and then one day you have to leave because the economy's collapsing or some dictator is coming after you.

If your money is in the national bank or in a bank that's controlled by the national government, your money is gone. You can’t move it, you can't take it with you, in fact, it can be taken away from you, like what they did in Greece.

With Bitcoin or another crypto, you can literally remember ten words in your head, and you take your money anywhere.

False dichotomy of Blockchain vs. crypto

KM: Between Blockchain technology and cryptocurrency, which are you most excited about? Or do you not separate them?

FP: I think it’s a false dichotomy. It’s like saying “are you more excited about TCP/IP or the worldwide web?” You need one for the other.

KM: I suppose the argument is– cryptocurrency can't exist without Blockchain, but Blockchain has other applications.

FP:Blockchain is a database. The database by itself doesn't have any value or any utility. It's just a way of storing data unless you build something that acts like a cryptocurrency or token.

Whatever you call the thing that you are connecting the dots in, crypto or token, it represents something which runs on something that looks like a Blockchain. We're going really into semantics now.

Altcoins are a test bed for Bitcoin

KM: Bitcoin was the original cryptocurrency built on a Blockchain. What are your favorite post-Bitcoin or post-Blockchain platforms?

FP: There are a lot of cryptos that have very interesting properties, but to be honest, I think Bitcoin is doing a great job. The Lightning Network is expanding rapidly. Rootstock are smart contracts on Bitcoin.

I see most other crypto as a test bed for Bitcoin. You try something, if it works out, then you take what's good of it and integrate it in your code base. That's what Bitcoin is doing.

I mean, Segregated Witness was first explored in other cryptos, like Litecoin, and then it was integrated into Bitcoin. The same thing with Lightning Network. Smart contracts came off colored coins, onto Ethereum, and now they're doing Rootstock. Zero-knowledge proofs used by Zcash and Monero - there is support for that on Bitcoin.

The value of Bitcoin is that it's so widespread. The hash power is unimaginable compared to the other cryptos. That's not to say that other coins don’t need to exist, but I think that Bitcoin will transform and eventually become the de facto standard for a global currency.

KM: You are an investor in Bitcoin yourself?

FP: Yes. It's got a lot of momentum and the way the power structure is organized makes it very robust. With Ethereum, 20 people could essentially decide its fate.

Most cryptos are centralized, even though they like to say they aren’t. Bitcoin is maybe the only truly decentralized currency right now. They can never agree on anything. It takes two years to get to any decision. Well, that's what democracy is– slow, inefficient, messy, but eventually it gets it right.

But if one day he flips or someone else takes over, it may go very wrong very quickly because it’s more centralized. Bitcoin has so many competing interests that you have to find a solution that fits most people. That’s the process of large coalitions.

KM: Blockchain can be a tool both for complete transparency and complete privacy, depending on how it’s used. How does society make sure that Blockchain is used for good rather than for questionable purposes?

FP:It’s the oldest question in the book– who watches the watchers? Quis custodiet ipsos custodes.

What if you have corrupt institutions, not in the sense of bribes, but corrupt in the moral sense? The UK is becoming a surveillance state, for example. They order ISPs to block certain sites and keywords, certain ports and protocols. People use VPNs to do anything of significance in the UK. There are hundreds of thousands of CCTV cameras everywhere. Same goes for China. The US is moving in that direction.

When you have these kinds of institutions running society, then it's pretty obvious that they will use Blockchain for further expansion. But I would imagine it will be different in a country like Norway or Estonia, which is already using the Blockchain for voting and in medical records.

From vision to adoption

KM: Since your book came out six years ago, have you amended your thoughts in any way? Has humanity disappointed you or impressed you favorably?

FP: What changed is my understanding of how things are working. I think it’s a little more nuanced now. Here’s something that I think most people don't understand. You see something not working and you think– “but it’s so easy, if they just did this!” And yes, maybe.

But how you get people to make the changes is the real issue. It’s not enough to recognize that things aren't working and they could be working better if everyone suddenly acted in another way. That's what a lot of activists do and that was also my problem. “But the solution is so obvious! Everyone can see this. We should just tell people about the solution, and then it would become crystal clear!” No, it's not.

First of all, the solution that you're envisioning may not necessarily bring the results that you want.

Because systems are so complex, tweaking in the smallest way and continuously checking how that impacts the system that you are perturbing may be the only way to actually change it effectively.

KM: Even when people are presented with clear facts and explanations, they are not rational actors or judges.

It’s about root causes. You think you found the root of all the problems, but then you come up against irreducible complexity. Also, if attacking the root cause takes limitless amounts of money and energy, essentially what you're saying is you're never going to do anything. And the only way to perturb the system upward may be to act on the leaves and have it trickle back to the roots – like an upside down tree.

KM: Since you have amended your vision somewhat, is there another book in the works?

FP: Well, one of the things that I amended was my readiness to pontificate.

KM: You're still giving lectures though.

FP: Sure, but I'm reducing the scope of the grandiosity of my goals somewhat. I feel like I'm more down to earth now. I still havе the visions and I’m trying to bring it all home.

It's the difference between someone who has a grand vision but has not developed it and someone who is now building organizations and realizing how difficult that is.

KM: Does being head of Hyperloop’s Blockchain department fit into your practical approach to changing the world?

FP: I think the project is one of the few that are actually likely to change the landscape of our cities in the near future. It's a bit like the introduction of trains or planes for the first time– that really changed the way we live. Beside space travel, I don't think there is anything else of that significance in terms of changing the landscape of cities.

Electric cars are going to change a lot how we live in cities, and Hyperloop is going to change how we move between cities and what distance we consider to be our immediate circle.

Some studies show: the amount of time that people are willing to spend commuting without getting annoyed is 25 minutes. This is true now, it was true in the 1950s, it was true during the Romans.

So the constant is time and the variable is distance. Now, in twenty-five minutes you could go 200 kilometers or more with the Hyperloop. We can connect cities like we connect neighborhoods now.