Cryptocurrency Market in Free Fall: Is Limit of Suffering Near?

Dmitry Cake
February did not bring stability to the cryptocurrency market. Total capitalization decreased 10 percent this morning, prices of fixed assets fell by 25 percent. Find out more in the CryptoComes price analysis. 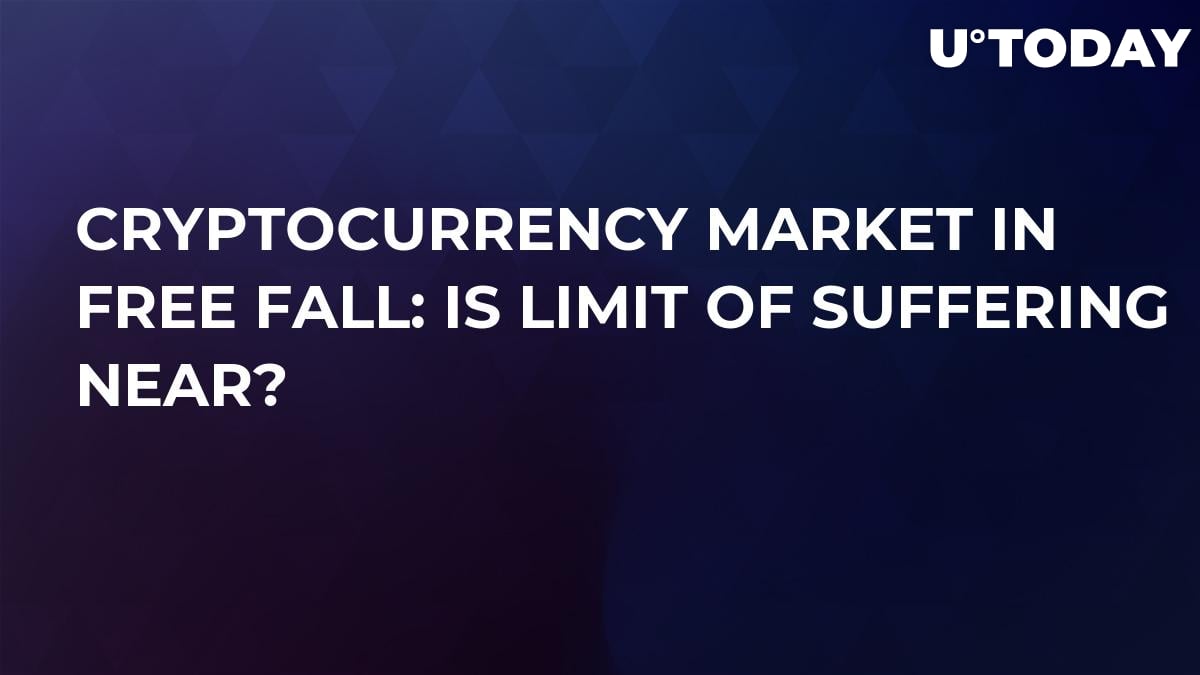 Despite positive news from South Korea, where the government has yet again assured its citizens (and the global crypto community) that it has no plans for harsh regulations on crypto trading, investor anxiety continues to gain momentum.

Total market capitalization fell to $424 bln within the day and practically surpassed the previous minimum of January 17.

As usual, the correction is directed by Bitcoin, falling 15 percent today and trading around the $8800 mark. Buyers of other coins in the top 10 are even less fortunate: on average the losses in this group constituted 25 percent.

The leaders of the self-destructive race are Cardano, with a drop of 30 percent, followed by NEM and Ripple, 29 and 25 percent down, respectively.

Zcash is looking surprisingly well in this context. It’s not even in the top 20, but impressively fell just a “laughable” 8.5 percent.

In the course of the trading session on December 31, Bitcoin buyers failed to defend the psychologically significant $10,000 mark. As a result, prices rushed to the nearest support line at the 8800 level. It falls on the lower boundary of the long-term rising channel formed in September 2017.

Bitcoin is literally hovering above the abyss, but the bears’ strength is depleted after a prolonged correction.

Bitcoin price can still update the minimums of $8400-8500, placed at the 0.786 Fibonacci retracement of the November-December 2017 rally. At these values, the enthusiasm of buyers will most likely manifest itself to the fullest.

The settling of Bitcoin price above the $9,000 level in the course of the day will indicate a turn in the trend and the initiation of growth.

The targets of this growth can be clarified after its confirmation. Alternatively there is the possibility of further correction to the $6,000 level. However, at the moment that is not the default scenario.

During the previous day, Ethereum price fell about 15 percent, which is not a bad result compared to other assets. The minimums of the previous precipitous December 17 drop have not been updated — in contrast to BTC and many other coins. This confirms the high interest of investors.

This time, the price stabilized at the 0.5 Fibonacci retracement of the previous growth wave and the lower boundary of the long-term rising channel — at $960. Given a global market reversal, the first barrier en route to new heights will be the $1070 level. In case of a negative development, however, Ethereum finds strong support at $850.

In the context of a general depreciation in cryptocurrency value, Zcash is particularly interesting. Its reaction was generally better than the rest of the market, falling just 8.5 percent to $375.

A possible cause for this unusual behavior could be the publication of a Grayscale Investments study, predicting that the currency value will appreciate to $62,000 by 2025.

The current price support is shaped by a 0.786 Fibonacci retracement of the December growth wave, as well as by the mirror resistance - support level of November’s end.

A large volume of trading in the $430-$560 range indicates an accumulation of investor interest at these levels and a formation of a fair price for this asset, passing through the middle of the price channel.

The first significant resistance for future growth is at the $450 level, which corresponds to the 0.618 Fibonacci retracement. In case of a negative scenario, the price will find strong support at $300-$340.