Vaido Veek
Bitcoin finds a short-term support from the Fibonacci level, Monero shows us overall strength and NEO is on the counter trendline 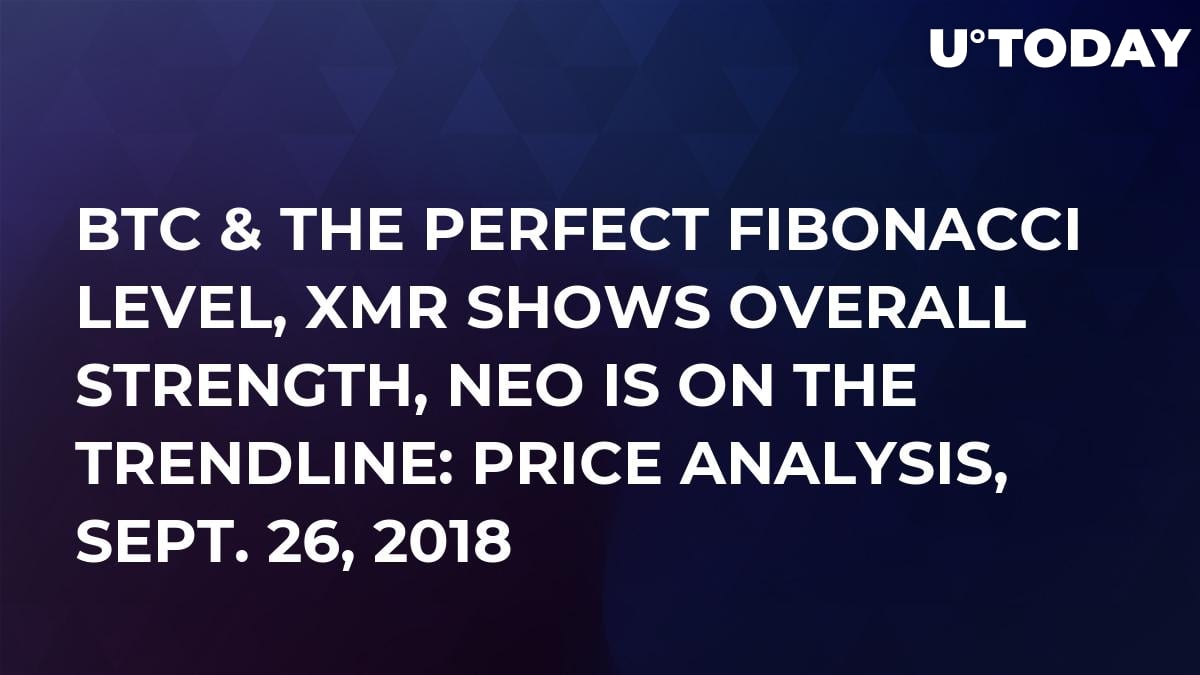 Bitcoin finds a short-term support from the Fibonacci level

Bitcoin price is almost on the same price level as yesterday but we have gathered more information from the current level, and currently, those signs are short-term bullish indications. 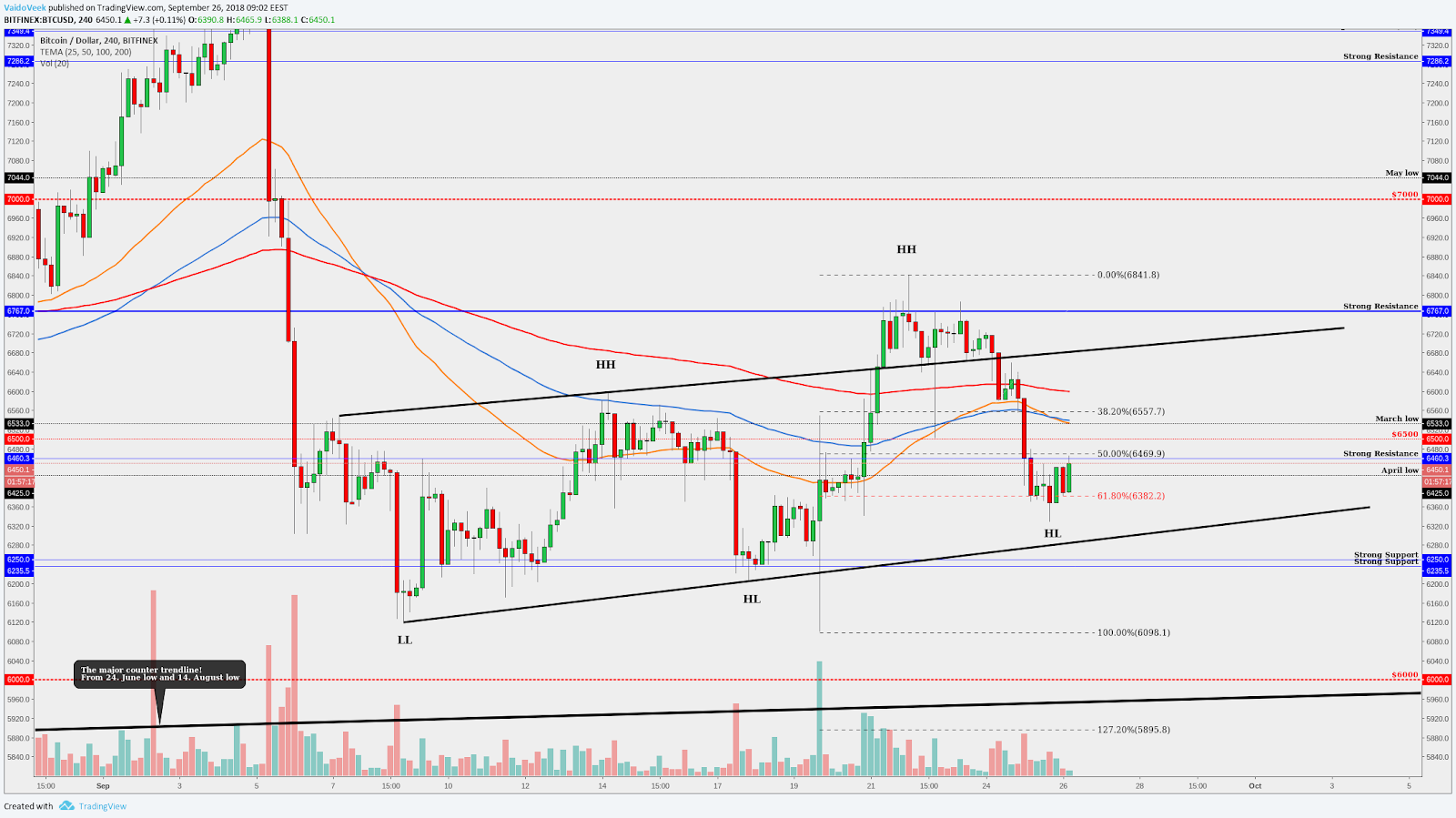 Yesterday, the lowest point was around $6,330 where the price touched the perfect Fibonacci retracement level of 62 percent and bounced upwards. After the bullish bounce, we got a bullish candlestick pattern called "Marubozu," which will indicate that we may see a continuation move upwards. Bitcoin has broken above the April low level and is now fighting with a strong resistance area around $6,460.

From the price structure perspective, this bounce occurred from a 'healthy' place, because Bitcoin made a short-term HL (higher low) which is very important if we want to see a bullish BTC. 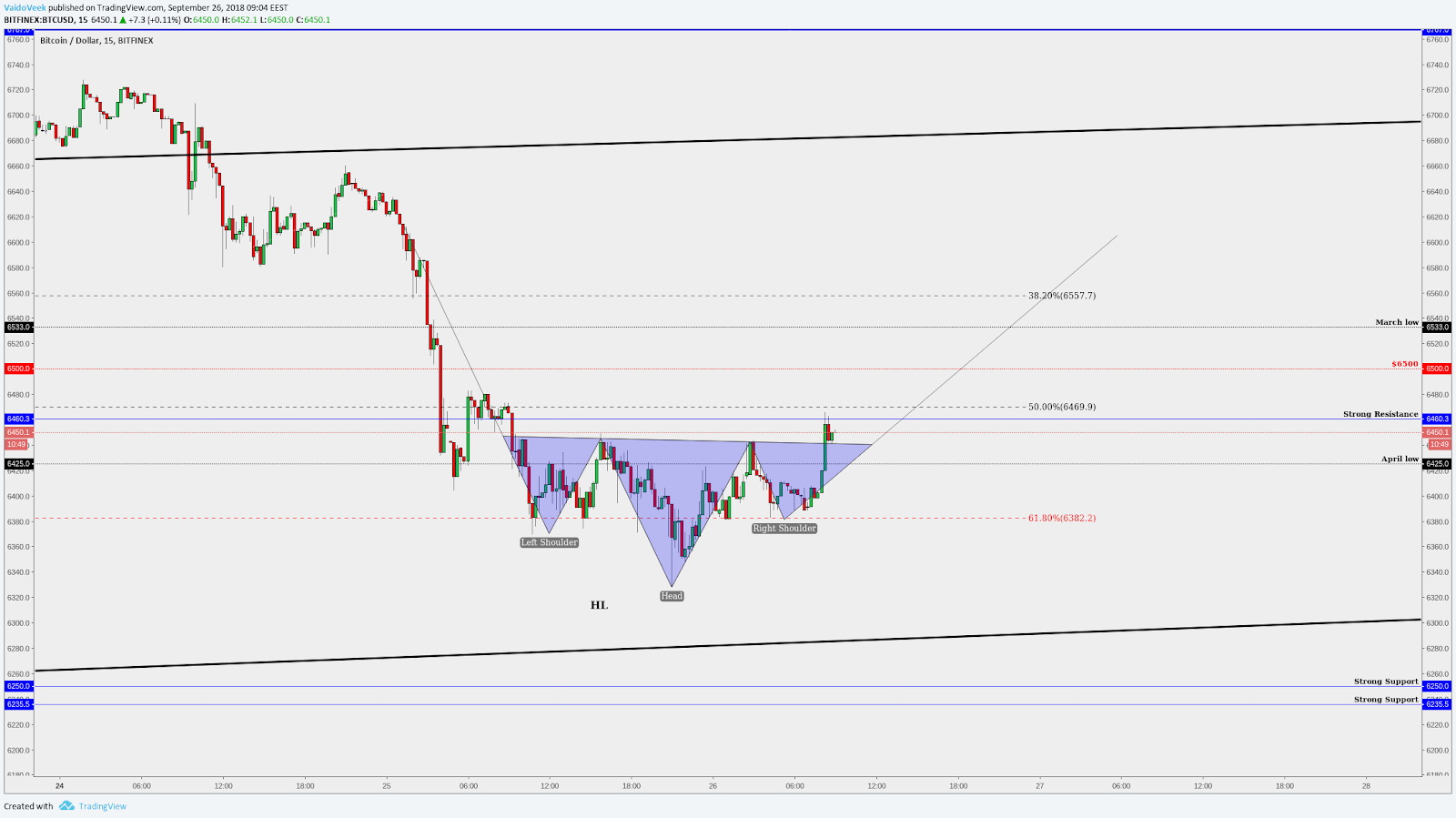 In the shorter timeframes, we could see a nice bullish chart pattern called "Inverted Head & Shoulders.” It shows that we have the momentum from the perfect Fibonacci level and it works nicely as a support level. BTC price also made a breakout from the neckline and technically it is ready to go higher but there is nothing clear before we are above those well-known resistance levels (Blue line- strong resistance, $6,500 round number which works as a resistance and the March low level which also starts to work as a resistance).

Monero shows us a pretty smooth and steady climb upwards. It has made very clean higher lows which will indicate that the current short-term trend is strongly upwards. 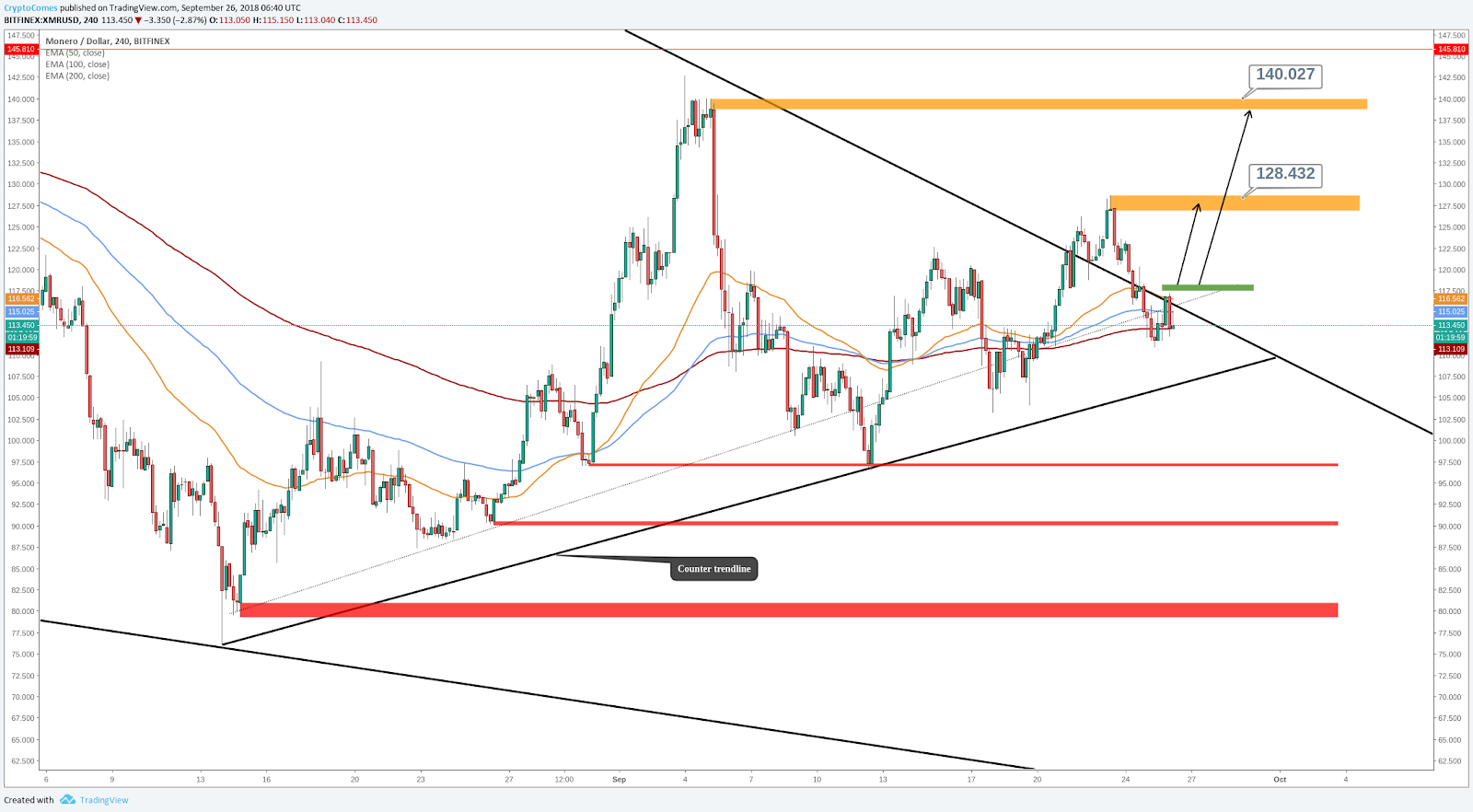 At the moment, XMR price is below the main down-trendline which works as a resistance, also there is a 50 & 100 EMA and they do the same thing.

Like you know, we have clean higher lows and also we have a bullish indication from the EMA's. On the chart you can see that the 200 EMA is below the 100 EMA, this means that we have a golden cross between the mentioned EMA's and this is a nice indication if we break above the major trendline that the climb will continue. The first targets would be the nearest resistances above us (green 'boxes'), the first one is around $128 and the second one is around $140.

Speaking about support levels and bearish confirmations, then the 200 EMA is below the current price (currently, this is a pretty rare case that the price is above the 200 EMA and this is a pretty strong sign that the coin has the power to hold the price after those dumps) which works as a support. If we break below that then we will have a major counter trendline around $105-$107. The trendline is a remarkable spot where we want to see a bounce upwards if we want to stay bullish, but if we got at least a four-hour candle close below that trendline then it would be a bearish sign and the down pressure is very strong. At that point ,you have to be cautious.

NEO (NEO/USD) is on the major counter trendline

NEO is on the major counter trendline (short-term up-trendline) and if BTC moves upwards from the perfect Fibonacci level at 62 percent then NEO has a pretty good and safe platform to bounce upwards because the price structure forms the higher low. 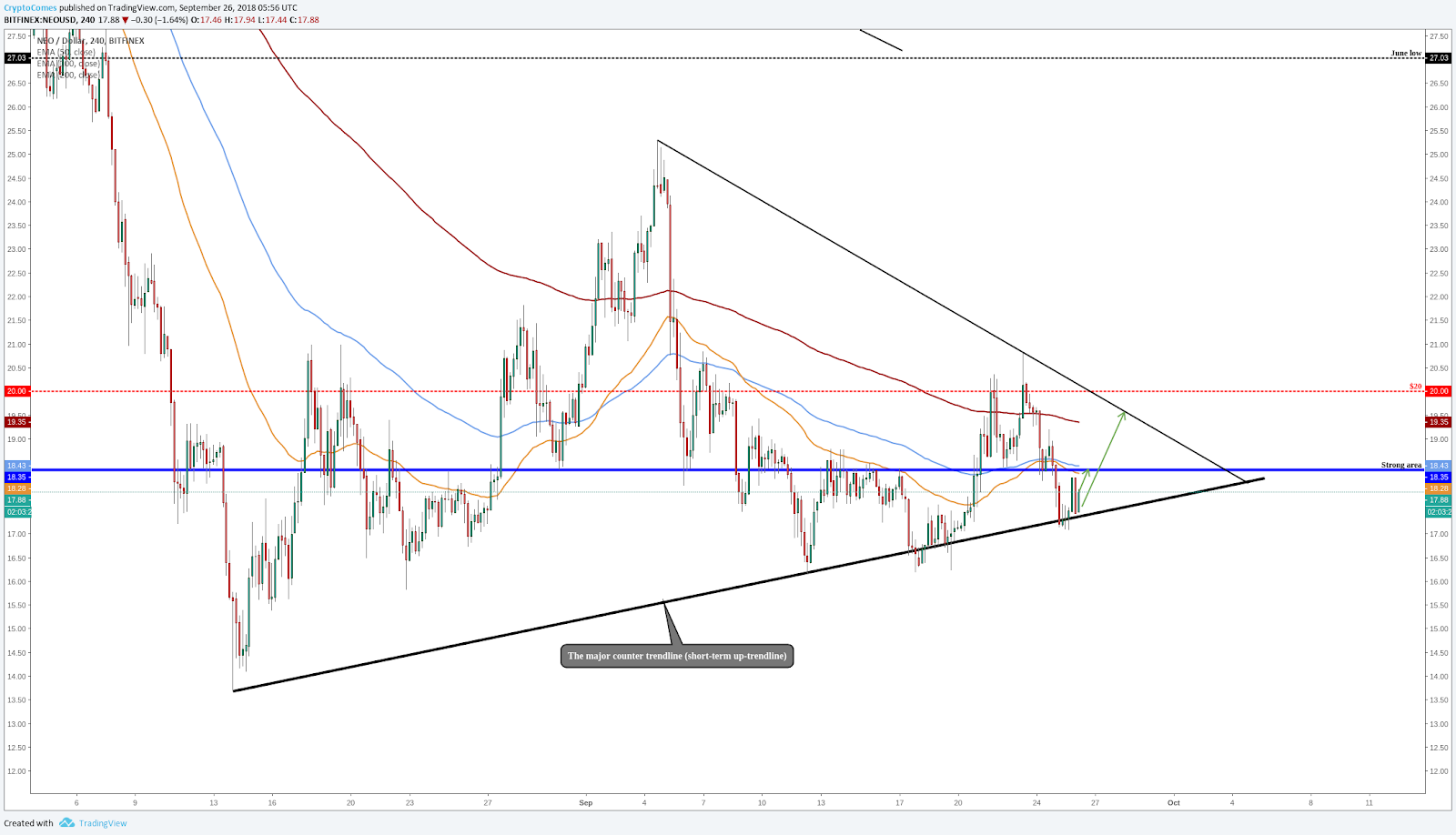 If we don't find the power to climb upwards and if BTC can’t beat those well-known resistance levels then it's a simple case- the first bad sign is a close below the trendline which currently works as a support and the second confirmation would be a short-term lower low close around $16.