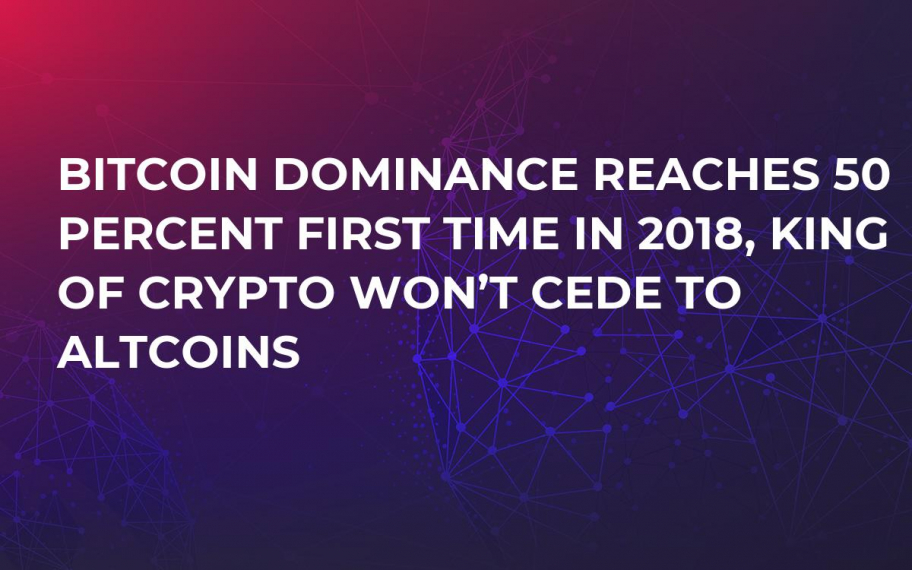 Bitcoin (BTC) solidifies its supremacy as the coin’s dominance hits 50 percent for the first time since December 2017. Presently, BTC is responsible for 51 percent of the total cryptocurrency market capitalization.

On Aug. 7, CryptoComes reported on Bitcoin’s market share slipping above 47.6 percent. Such a random percentage was, in fact, an important milestone for Bitcoin, since BTC has managed to match its market share during the December peak. While Bitcoin’s current price is far from the sky-high $20,000 mark, it doesn’t cede the field to other altcoins, remaining at the forefront of the cryptocurrency industry.

What triggered the increase?

With the cryptocurrency industry experiencing a major downtrend for almost a week, barely any major coin ended up in the green. The entire crypto market cap (currently sitting at $207.9 bln) fell by about seven percent. Ethereum (ETH), Ripple and other currencies suffered from double-digit decline, but Bitcoin, on the other hand, only lost five percent of its value, which allowed BTC to reach a record-high dominance of 50 percent in 2018.

Overall, there is nothing surprising about the recent increment of BTC dominance, since the coin’s market share has been organically increasing for months. The famed Bitcoin bull Tom Lee already noticed this trend a few days ago, claiming that the steadily rising market share indicates that Bitcoin will not experience any dramatic loses in the nearest future.