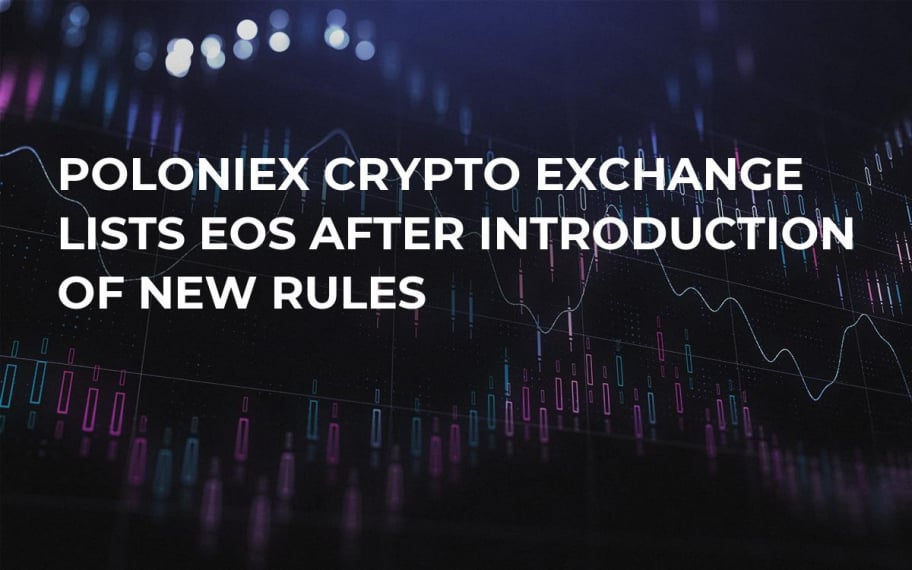 In the evening of July 31st, the oldest US crypto exchange Poloniex announced its support for EOS coins. This happened in the first listing of new tokens after a few coins were delisted, the ones that did not fit the new assessment rules.

Poloniex has recently been acquired by a mobile payment app Circle supported by the Goldman Sachs bank. The new owner decided to make the exchange work following new rules of assessing virtual assets.

On July 31 it was announced that users can already deposit and withdraw their EOS coins. On Aug. 1 trading is due to start, EOS will be paired with such top coins as Bitcoin, Ethereum and USDT.

The exchange reps also made it clear that Poloniex is working only with the new EOS tokens, excluding old ERC20 ones or the platform’s airdrops.

EOS was added after nine other altcoins were delisted by the exchange last week. The newly implemented tool named Circle Asset Network is now being used to choose which assets to list from among others.

The new tool works based on the data obtained in several categories– fundamentals, the technological basis, the team of the project, its business model and the coin’s market behavior. EOS was listed following the assessment of all the above-mentioned aspects of the token.

Analysts expect the launch on Poloniex to be taken as a positive indicator by those who are hodling EOS asset. Nevertheless, the market has not responded to this event yet. Over the last day, the coin lost around four percent, at the time of writing is trading at $7.27, following the rest of the crypto market in its decline.

The majority of the EOS trading volume is gained through transactions against USDT on platforms like OKEx, Binance and Huobi.

Anyway, EOS remains one of the biggest virtual assets with a $6.6 bln market cap.

Recently, it has been reported that the Poloniex exchange is freezing its customers’ accounts and its support team rejecting the angry users’ complaints. The explanation given about this by the exchange team was the implementation of new Know-Your-Customer and Anti-Money Laundering rules. However, now this case is under control of the US Department of Justice.