Dmitry Cake
Bitcoin finds a foothold above $11,000, waiting for sufficient volumes to make a breakthrough 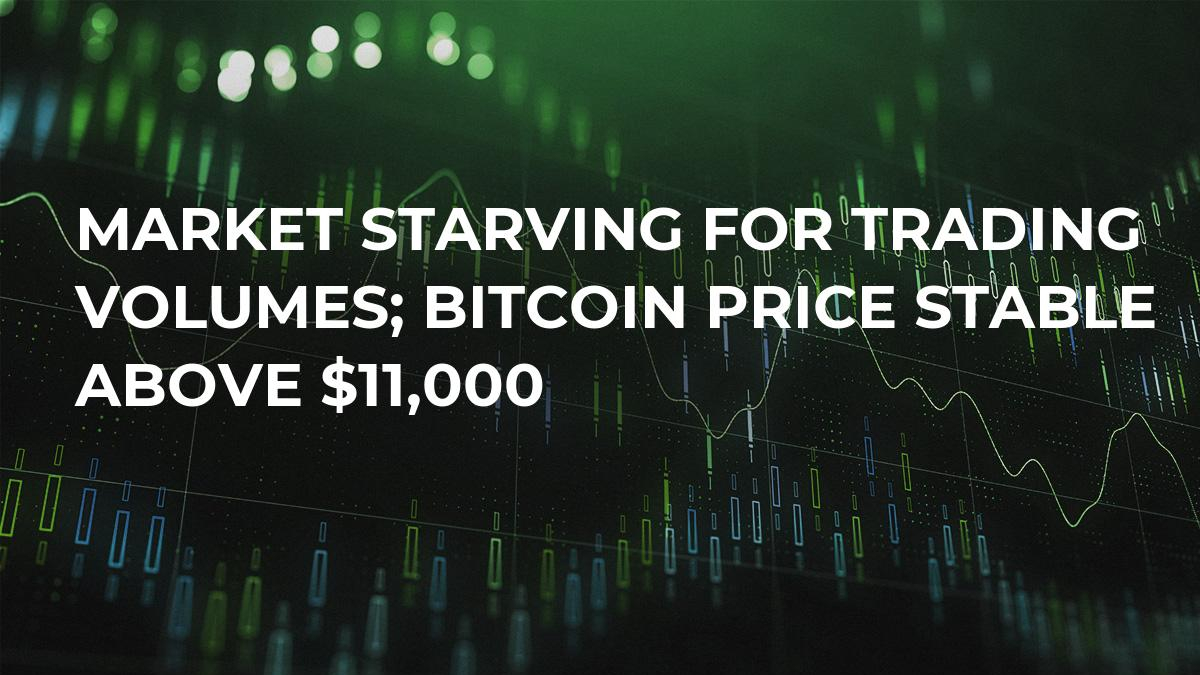 We welcome everyone to the beginning of a fresh new week, which promises to be exciting for investors and traders, and hopefully profitable for our readers. Over the past weekend, the long-awaited trade volumes never came to the market, but the air is filled with electricity and lightning can strike at any moment. Even without significant volumes, Bitcoin feels confident and step by step, it continues to cement the $11,000 level, reaching $11,500 again during the weekend.

The main asset continues to draw strength from altcoins

It seems that the main asset has switched on the “vacuum cleaner” mode and is going around the market, sucking the juices out of unstable altcoins. This is revealed by the virtually unchanged market capitalization, around $465 bln by the beginning of Monday, accompanied by an increase in Bitcoin dominance to 41.5 percent. Coins from the top 10 are not as susceptible to Bitcoin influence, so they either did not change or grew, following their forefather. Ripple and Stellar stand out the most, with gains of 10 percent each. NEO’s results are more modest- it’s taking a break after the Ontology airdrop and is the only red coin in the top 10 with a not-too-scary loss of 0.5 percent.

At the time of writing, the Bitcoin chart is forming a double top pattern with a value of $11,540. Classically, this figure of technical analysis predicts a price fallback, but the decline, if it happens, promises to be insignificant, up to the nearest Fibonacci retracement, which is 0.786 and $11,250 in this case. We also allow the possibility that growth will continue directly from current values since bears have temporarily left the market. In confirmation of this theory, we can see an unrealized bearish wedge pattern, marked in red.

The closest growth target is now $12,000, where the struggle of buyers and sellers can intensify. If this target is conquered, we will see acceleration toward the range of $13,000-$13,300. We don’t expect strong resistance on this path because historically very few transactions have taken place in the $12,000-$13,000 range, as indicated by the volume profile. In the case of a negative development, a correction is possible to the 0.618 Fibonacci retracement, which coincides with a strong support at $10,800. Bitcoin still sets the mood for the market, looks great and promises profits to both short-term and medium-term investors. Our readers are not advised to part with long positions until the $13,000 level.

When analyzing Ripple’s price chart, we come to the conclusion that sellers have exhausted all resources and now the near future of the asset ceases to be vague. A powerful support was found at the level of 0.88, below which the price has not dropped since the end of the correction from the beginning of February. Despite the relatively modest volumes, a sufficient number of operations were performed at the range $0.88-$0.96 to break a converging triangle, marked in red, and push the price to $1.

After reaching a psychologically important mark, the price can fall back to the 0.382 Fibonacci correction and the value of $0.96. To the relief of long position holders, a mirror level of support-resistance is also located there, so it is unlikely that the price will drop lower. The initial volume at the triangle’s break allows us to consider further growth, the first intermediate target being the $1.10 level. The next target is in the range of $1.30-1.40, which we wrote about in the Feb. 19 review. Our reader recommendation is the same as for Bitcoin- hold!

The situation with Stellar is repeating XRP history in many ways, so we’ll be brief. Support was found at the $0.31 level, and although there is still room to fall “safely,” we don’t think this is likely. Growth was also activated by the break through the triangle’s descending boundary at initial volumes, it seems that XLM and XRP have the same investors.

If Bitcoin doesn’t pull some unexpected stunt, the next target for Stellar is $0.42, which coincides with the 1.618 Fibonacci expansion and a mirror level of support-resistance. With negative developments, a fall back to $0.34 is possible.