Alex Dovbnya
The article features short and long-term Bitcoin price predictions, which may give you an idea of where BTC is going in the nearest future 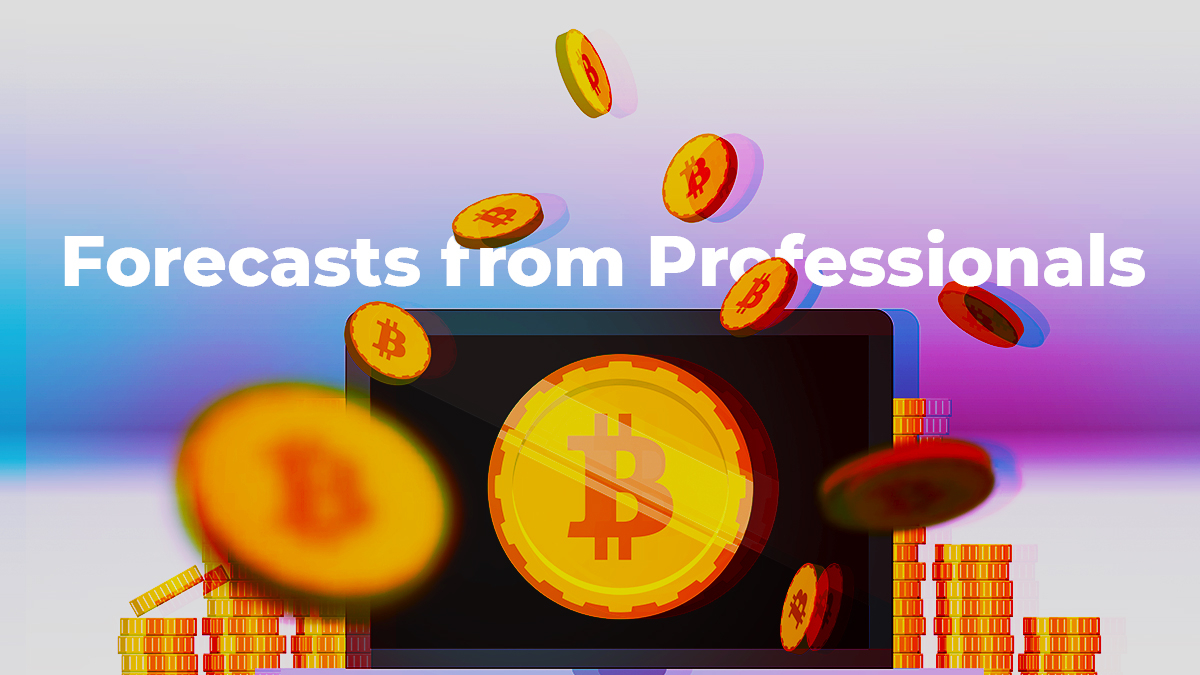 The cryptocurrency industry undoubtedly reminds the late 90s dot-com bubble. Amazon, which is poised to become the second company to reach $1 tln market cap, was a tiny initially a tiny firm with barely 200 of employees when it went public in 1997. The same goes for Bitcoin– starting at $0.003 on BitcoinMarket.com, BTC is worth $12,970 with a market cap that exceeds $230 bln. However, will it be able to surpass today’s tech giants?

It is crucially important to know where this trend will go in the future. Many would say that it was too late to invest in Bitcoin back in 2012, 2013, 2015…until it reached its all-time high in December peaking at $20,000. Some experts predict that Bitcoin may be worth astronomical sums if it experiences mainstream adoption. However, there are still some ardent Bitcoin haters in the likes of Warren Buffett who keep insisting on BTC being yet another Ponzi scheme.

So, let’s jump into the latest and the most relevant Bitcoin price predictions in order to find out whether it’s worth putting your money in crypto in 2018.

Forecasts in 2010 (expectations and reality)

You’ve probably heard many inspiring stories about jaw-dropping investment gains of those who jumped on the Bitcoin train early. A Norwegian Kristoffer Koch became a dollar millionaire after having invested only $27 back in 2009. However, do not be too hard on yourself even if you’ve already missed the boat since only the biggest crypto evangelists believed that Bitcoin would turn into a multi-billion international industry. Koch, like many other Bitcoin millionaires, wasn’t a firm crypto believer himself – he forgot about his small cryptocurrency investment only to discover a mammoth-size profit a few years later.

I thought to myself, didn't I have something like that? Koch told a local newspaper

To put this into perspective, let’s have a look at the Bitcoin Pizza Index (BPI), which stems from the first known purchase with Bitcoins. Back in May 2018, Laszlo Hanyecz spent a staggering amount of 10,000 BTC in order to buy just two pizzas ($41). As of now, BPI is set at $129.7 mln.

Since the inception of Bitcoin, numerous naysayers (from the mainstream media to run-of-the-mill experts) tried to kill the king of crypto numerous times, but every time it would come back from the dead. Let’s recall the infamous 2011 Forbes article ‘So, That's the End of Bitcoin Then’ which states that Bitcoin would not recover after its price plummeted from $17 to just pennies on the now-defunct Japanese exchange Mt.Gox. Tim Worstall, the author of this prediction, points to the fact that the currency is not liquid enough and has numerous security issue.

Now, have a look at how the price of Bitcoin has changed every year since June 20, 2011 (the day when the article was published).

Bitcoin turned out to be the true winner of 2015 outpacing all the traditional currencies – it gained almost 40 percent, which is nearly twice as much as its nearest competitor Somali shilling. That followed a series of gloomy forecasts about Bitcoin from pundits in 2014. In all fairness, these predictions were not baseless, since 2014 turned out to be the disastrous year for the king of crypto that resulted in a 56 percent price drop. The chart below is a visual representation of how BTC price not only rebounded but also reached new heights.

2015 was the year of increasing Bitcoin adoption as a payment method by numerous companies around the globe. Combining with the long-awaited PayPal and Western Union partnerships, it turned out to a boon for the whole crypto industry.

In 2016, BTC continued its growth due to witnessing an impressive 75 percent surge. According to the initial 2016 Bitcoin predictions, there were several reasons for that:

2018 was a difficult year for Bitcoin, its price fell by more than 70%. The total crypto market cap has dropped below $200 mln for the first time since 2017. However, it is also worth mentioning that the BTC dominance was constantly increasing. Here are the main reasons why there was no another major bull run in 2018:

Taking into consideration all the aforementioned facts, even then it was difficult to hope for positive results for Bitcoin, as well as five-digit sums. However, many experts still gave positive predictions about the price of Bitcoin, consider some of them.

BitMEX’s CEO Arthur Haynes makes a very bold prediction that BTC may such astronomical numbers as early as in 2018 if starts alight. It is worth mentioning that Haynes has already predicted the bearish trend of 2018 (he believes that BTC may reach its rock bottom at $2,000), but he believed that the upcoming regulations and a positive SEC decision may cause an immense spike in value.

Remarkably enough, in January the crypto experts, who were polled by Finder.com, also believed that Bitcoin was going to witness a tremendous growth reaching $44,000 by the end of 2018 (thus, nearing very close to the aforementioned price). However, this figure has been recently slashed to $19,605.

Now, let’s move on with an extremely bullish Bitcoin price prediction for 2018 and 2019 from Pantera Capital, the first crypto-oriented investment firm. While claiming that Bitcoin will be at $21,000 by December 2018 (reaching its new peak), they were also extremely optimistic about Bitcoin’s future in 2019. Pantera Capital predicts that BTC will cost not less than $67,000. Pantera Capital’s CEO Dan Morehead attributes these huge numbers to the fact that custodial services are starting to dive into crypto (this trend continued in 2019).

Half of 2019 is over. The sluggish movement in the winter turned into active growth in April, which continues today. But what about the price of Bitcoin until the end of 2019?

The market is clearly bullish. Corrections don’t take more than a week of time, and the maximum amount doesn’t exceed 30%. The market situation at the beginning of July 2019 is similar to positions preparing before the next rally. Many experts voiced the figure of $23 thousand by the end of 2019 and it sounds believable. Of course, it’s difficult to give an accurate price forecast, but we give 90% that it will be higher than the current one.

There is also an opposite opinion, which Peter Brandt expressed, Bitcoin expects a deep correction, which can cut the price by 80%. In this case, the price will be no higher than $3 thousand, but this scenario doesn’t seem realistic in 2019.

The famed Bitcoin evangelist John McAfee is doubling down on his claims that the era of decentralization is inching closer. He believes that BTC is accelerating at a rapid speed, which makes his previous $500,000 prediction invalid.

Bobby Lee, the founder of BTCC (formerly BTCChina), also believes that that Bitcoin is capable of shooting up to $1 mln, but, according to his Bitcoin price prediction for 2020, it takes much longer to reach this milestone.

Here’s what Bitcoin price will look like in 2020 according to two economic models proposed by Arthur Haynes and Spencer Wheatley.

As you see, the two forecasts are drastically different. However, Wheatley’s model inclines to underestimate Bitcoin’s market cap, which leads to such bearish predictions.

John McAfee is not the only expert who is being extremely bullish about Bitcoin. John Pfeffer, an investor from Pfeffer Capital, predicts that Bitcoin could eye $750,000 in the nearest future, but, unlike McAfee, he does not specify the exact date when this 75-fold spike is going to happen.

Pfeffer is certain that Bitcoin emerges as the first asset that could potentially replace gold. There will be no need to keep gold bars in your backyards since Bitcoin is very easy to store.

In sharp contrast to this, a well-known American economist Nouriel Roubini, who correctly predicted the 2008 financial crisis, call Bitcoin, along with other currencies, the ‘bubble of all bubbles.’

If you buy something like Bitcoin or some cryptocurrency, you don't have anything that is producing anything Warren Buffett weighed in on the future of crypto

Wences Casares, a director of PayPal, predicts that Bitcoin has the potential to hit $1 mln by 2025. Now owning Bitcoin, according to Casares, is the biggest mistake that an investor can make at this point, but he doesn’t encourage anyone to make gargantuan investments in BTC. He encourages anyone to put one percent of their net worth in Bitcoin and see what happens to this investment in a decade.

Apart from Casares, Jeremy Liew, the first Snapchat investor, is also certain that Bitcoin will reach unsurmountable heights judging by his Bitcoin price predictions for 2025. Liew claims that one BTC will set you back half a million by 2030 because of the prevalence of smartphones and rising political uncertainty.

What are the forecasts from professionals from the world of cryptocurrency
Once we’ve covered it all, let’s have a look at what famed financial pro-Bitcoin experts have to say.

Tom Lee is usually extremely enthusiastic about the future of crypto. This time, the Wall Street permabull predicts that the next Bitcoin’s comeback is in the offing. He claims that the constantly increasing Bitcoin’s dominance is a good sign that that the king of crypto is only starting its another bull run. While not giving exact price predictions during his recent interview, Tom Lee believes that Bitcoin will keep hovering in the same price range for a while.

Social Capital’s Chamath Palihapitiya claims that Bitcoin will be worth $100,000 in the next three or four years. He also believes that the king of crypto would be able to reach a $1 mln mark in a couple of decades. It is possible that we are dealing with a Bitcoin price prediction for 2030 or even 2040.

Ran Neu-Ner, the CEO of Onchain Capital, states that we are yet to witness the mainstream adoption of cryptocurrencies. Similarly to John Pfeffer, he draws a parallel between Bitcoin and gold.

In a couple of years, there will be more demand for Bitcoin than for digital gold said Ran Neu-Ner in his recent CNBC interview

We’ve covered both extremely bullish and bearish predictions, so it is crucially important to find a middle ground here. As of one, one can only determine the factors that may have the biggest impact on the Bitcoin price prediction today.

In terms of long-term forecasts, they are very vague and unreliable. However, if we continue seeing more companies getting on board, crypto mainstream adoption may become a reality. Since then, there will be no limit as to where Bitcoin price can spike up, so the aforementioned $1 mln predictions do not sound too crazy.