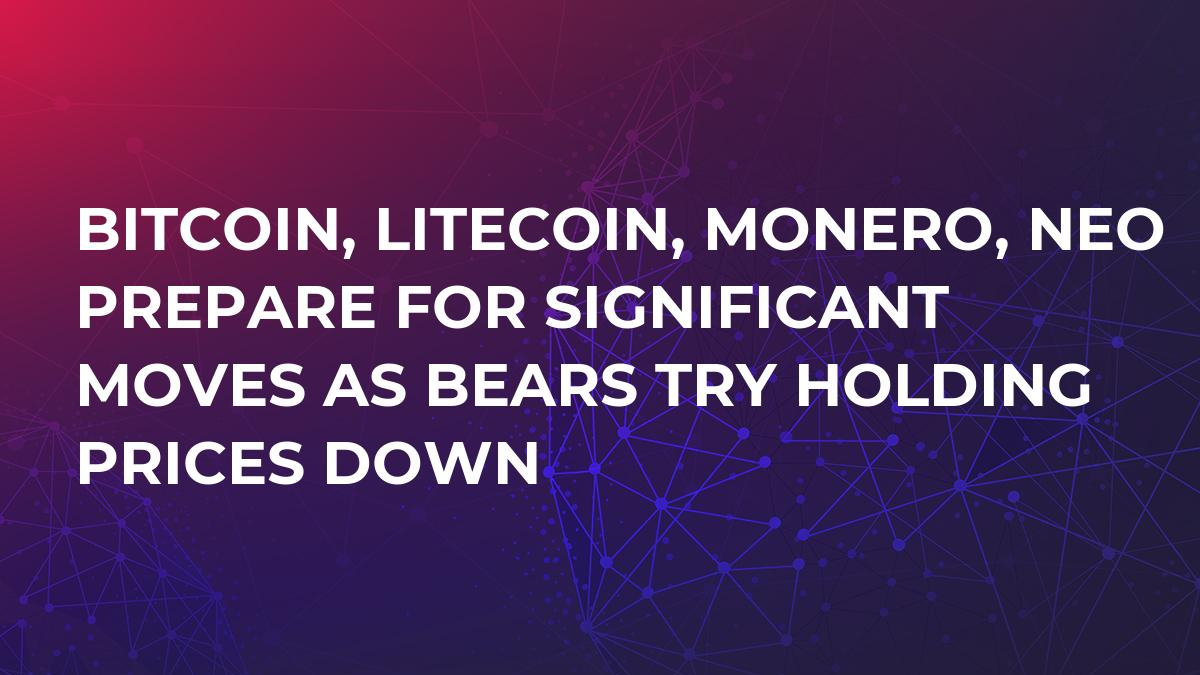 The situation remains unchanged since our last review as the currency pairs’ volatility is low. BTC/USD, LTC/USD, XMR/USD, NEO/USD restored yesterday but failed to develop their progress as bears still make attempts to hold the price and to push it down.

Bitcoin demonstrated no significant fluctuations during the late American and Asian session. The currency pair jumped above the local ascending trend line within the American session and tested it later. Here lies the support area at $8,695 which also holds BTC/USD from declining below.

Bitcoin reached the resistance area at $8,890 during the late US-Asian session. However, the Bitcoin price retreated sharply meaning bulls have not enough power to develop their progress.

The currency pair is higher the Ichimoku cloud meaning bulls have the initiative in the moment of writing this review. There are no candlestick signals currently and it is better to wait for them in order to take further actions.

Possible scenarios for BTC/USD are the following:

BTC/USD still remains inside the Ichimoku cloud and goes towards the upper border of the formation. It seems like the situation is going to change in the nearest future. If Bitcoin leaves the Ichimoku cloud from above, there may be a sharp upside momentum.

Litecoin went above the ascending shorterm trend line during the late American-Asian session but failed to develop its progress. LTC price almost reached the resistance area at 153 level but then we have seen a Shooting Star reverse candlestick pattern. Litecoin returned to 146 support area where it fluctuated until the moment of writing this review.

Litecoin price is above the Ichimoku cloud meaning bulls have initiative currently. There is no candlestick pattern at the moment.

Possible scenarios for LTC/USD are the following:

As for the daily chart, the situation is the same as yesterday. Litecoin price remains within the Ichimoku cloud. But it jumped off the lower side of the formation meaning there are chances for bulls to drive it towards the upper border of the Ichimoku could at least.

Monero had lower liquidity during the Asian session demonstrating several price gaps. The currency pair moved above the local ascending trend line during the American session, but then fell below it and even managed to cross the support area at 214. However, bears were unable to change the situation significantly as XMR price jumped off the midterm descending trendline (paint in green on the screenshot).

Later the Asian session XMR/USD managed to jump over the support area at 214. There are no candlestick signals currently.

Possible scenarios for Monero are the following:

The currency pair jumped off the lower border of the Ichimoku cloud on the daily chart meaning bulls may have chances to change the situation in the nearest future.

The currency pair have tested the local ascending trend line from below but failed to jump over it. The test of the resistance area at 68 was also unsuccessful. NEO jumped off those lines and even tried to penetrate the Ichimoku cloud.

NEO/USD went above the descending midterm trend line during the Asian session. The current pair stays above it at the moment. There are no candlestick patterns in the moment of writing.

AS for the daily chart, NEO/USD jumped off the lower border of the Ichimoku cloud meaning bulls have perspectives to change the situation in the nearest future.