Stavros Georgiadis
The main question in the crypto market is whether Bitcoin is a form of irrational investment exuberance. 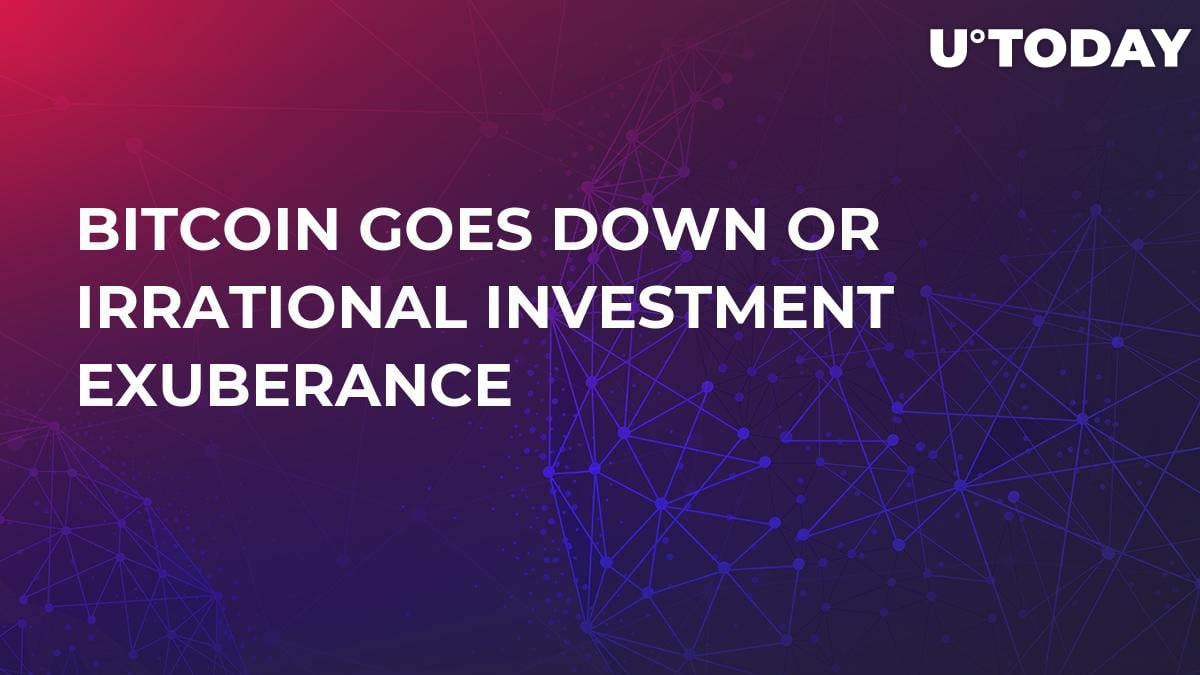 The recent collapse of Bitcoin with its sharp decline has raised very important problems and issues for investors as the Bitcoin price has become critical for holders and even miners. In this article, we will list some of the most important challenges that Bitcoin is facing and will provide a technical analysis perspective. The main question is whether Bitcoin is a form of irrational investment exuberance.

Fundamental and business perspective on Bitcoin

Bitcoin’s modern investment philosophy is based on being a revolution in the financial industry, a deregulated solution for the major financial activities, and becoming an alternative form of currency, replacing the so-called fiat currencies. But history, as recorded by recent price, has proved that expectations were set too high, and an irrational exuberance for Bitcoin’s price and mainly business applications and acceptance is already a reality. Here is a list of most important challenges and risks that Bitcoin has experienced so far:

- Hacks and lack of security;

- Bitcoin can be traced;

- Ease of use and acceptance;

Bitcoin is very hard to value

A key question remains unanswered. In economic theory, a financial asset is valued based on its future expected cash flows such as its dividends, or in the example of equities, the free cash and earnings flow. The financial analysis of trends related to profitability and financial performance with the focus on financial ratios can help investors build arguments in favor for or against of any financial asset.

Bitcoin lacks this basic principle, as it does not have any cash flows to estimate and its price is mainly the result of speculation and of the perception of investors about its value and both current and future business prospects. Furthermore, as we will see, its recent price collapse could pose serious future business viability problems to holders and miners.

Making a reference to monthly and daily Bitcoin charts, the top is around $20,000, and the most recent price of $4678 clearly shows a shift in the investing community perception of the real value of the cryptocurrency. 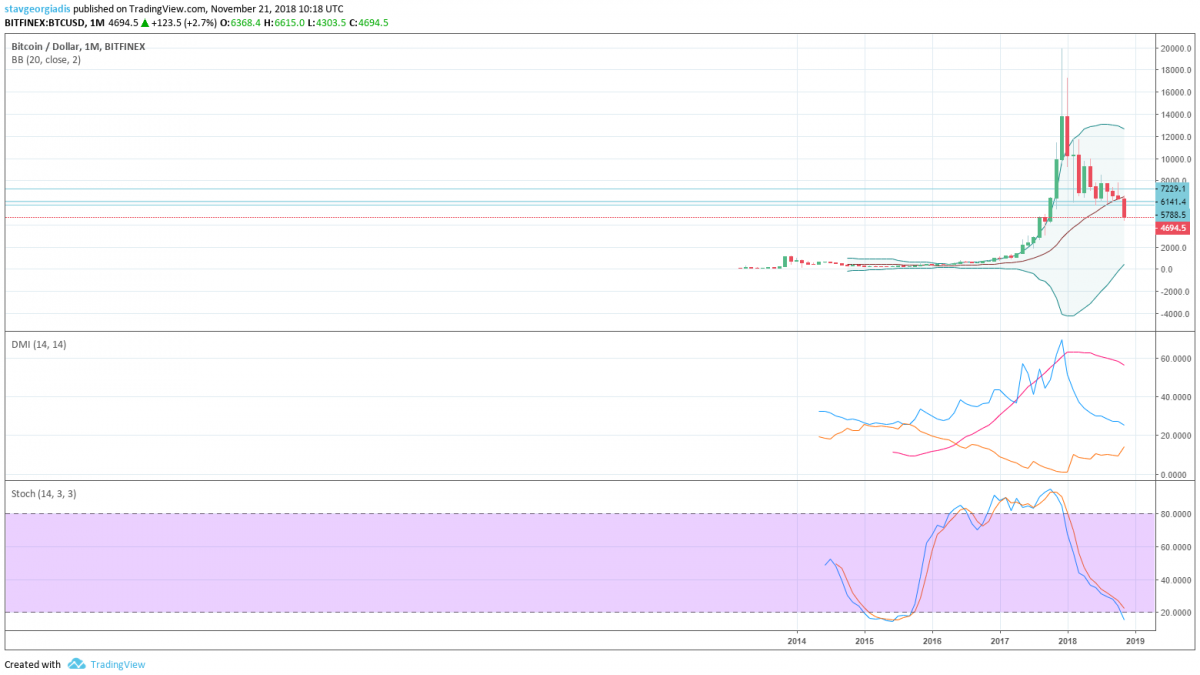 In investing, a golden rule for success is to trade with the trend, not against it. It is tempting for many traders to try to catch the bottom price of Bitcoin, and a few days ago we mentioned it is too risky, as the price continued its downward move. 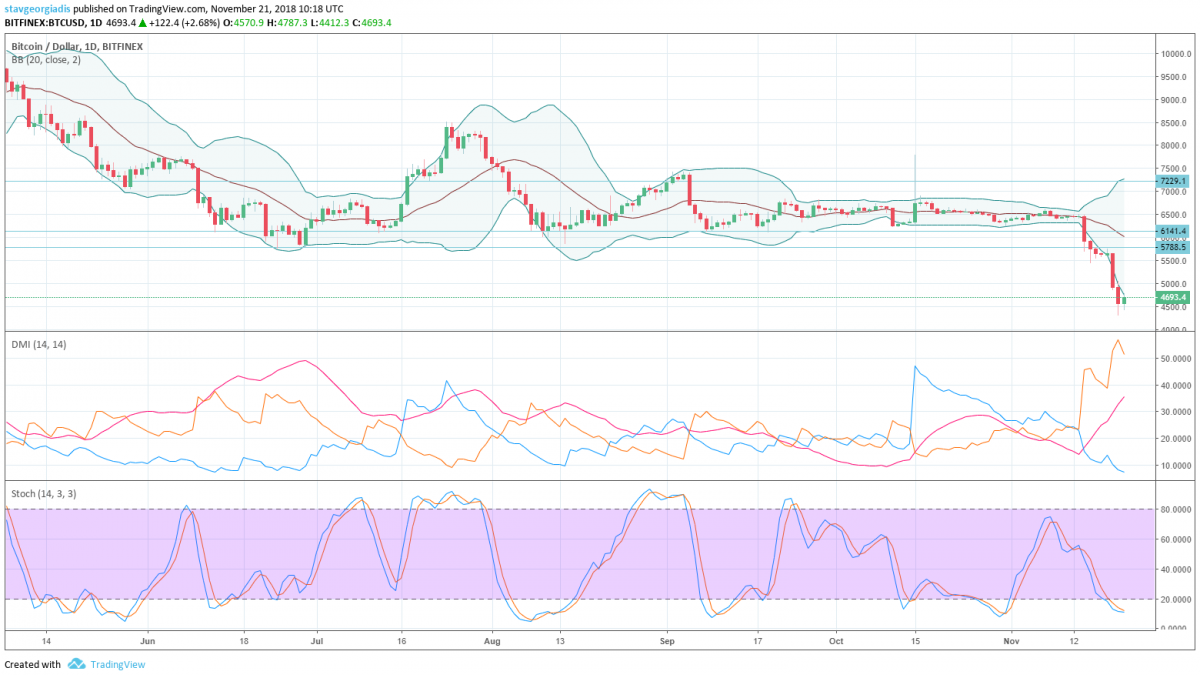 The main points for now are that a strong downtrend is present, evidenced by the value od ADX/DMI indicator currently at 36.13 showing a strong trend. Though the cryptocurrency is at extreme oversold levels supported by the value od daily stochastic indicator (14,3,3) at 10.98 below the level of 20 which indicates an oversold asset, there are not any strong arguments to buy the cryptocurrency and try to catch the bottom. It is too risky, and with no real support at current levels, there is a very strong probability that the price could decline further.

The daily Bollinger bands are at $4755 and $7278, respectively, for the lower and upper band, having expanded significantly and showing intense volatility. The daily 20-period and 50-period exponential moving averages are now at $5795 and $6186, respectively, pointing down and supporting the strong downtrend.

Traders looking to buy the cryptocurrency at current price levels could aim for the former support now resistance levels of $5790 and $6095. If the cryptocurrency trend is to change from downward to upward, a prolonged closing price above the 50-period moving average and the level of $6200 is required. Until then, there are better odds to stay with the recent trend and sell any bounces to resistance levels mentioned.

Finally, regulation and the degree of acceptance form several countries for Bitcoin as a form of financial asset and way of payment in daily financial transactions is a key driver that will influence its future price.