During the World Economic Forum in Davos the other day, Ripple’s CEO Brad Garlinghouse said that many cryptocurrency firms are likely to conduct an IPO this year.

He also said that Ripple would be among them but he expects his company to be on the winning side.

Some have started expressing their doubts on Twitter that the upcoming IPO of the Ripple giant is going to be good for the XRP price and those who invested in this coin.

However, some in the XRP community are definitely positive on this news, believing that XRP investors will benefit from it.

An XRP supporter known on Twitter as ‘Steven Bull From the Diep’ (with around 15.5 thousand followers) is one of those who supports the idea of Ripple going public.

In his recent tweet, he lays out several particular reasons why he thinks that the Ripple public offering will push the XRP price up.

He reckons it will get Ripple more funds to expand its network, hire best talents and solve real problems that only XRP can handle. 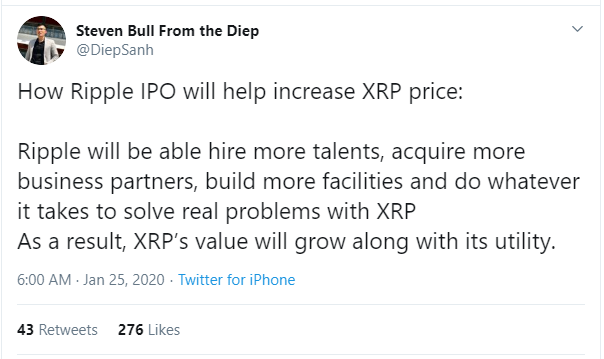 An investor @XrpMr has offered his subscribers a survey regarding the announced IPO of Ripple. He offers the community to express their views, whether they believe the IPO will be good for the XRP price, bad for it or they can also opt for saying ‘I have no idea’.

Nearly 4,500 people have voted so far. 65.9 percent believe that the IPO will be good for the XRP market value, 13.6 percent reckon that the XRP price will not increase after it. Slightly over 20 percent chose the ‘I have no idea’ option.