JC O’Hara of MKM Partners seems to be convinced that Bitcoin (BTC) is no longer in a bear trend. During a new episode of CNBC's "Trading Nation," he opined that the crypto king could touch the $12,000 level, which seemed unattainable for the bulls less than two months ago.

According to O’Hara, Bitcoin is no longer in the consolidation stage that took place in the second half of 2019. Now, its price action is driven by "positive momentum" that could push the BTC price to as high as $12,000.

“We broke out of the downward sloping trend channel. We’re breaking above the $10,000 psychological level, and we’re of the opinion that positive momentum will continue to follow positive momentum. So that’s why we think in the short term we could see $12,000 on bitcoin,” O'Hara said.

On Feb. 12, Hedgeye Risk Management also determined that it was still in a bullish trend. This is the same company whose CEO, Keith McCullough, compared BTC to the tulip mania in late 2017.

The Bitcoin (BTC) price has recently faced a brutal rejection near $10,500, dropping to an intraday low of $10,087 on the Gemini exchange.

CNBC was in danger of proving itself to be a contrarian indicator once again, but BTC quickly managed to recover after its $400 drop. It is currently changing hands at $10,270 after shooting up to $10,517 and again getting rejected. 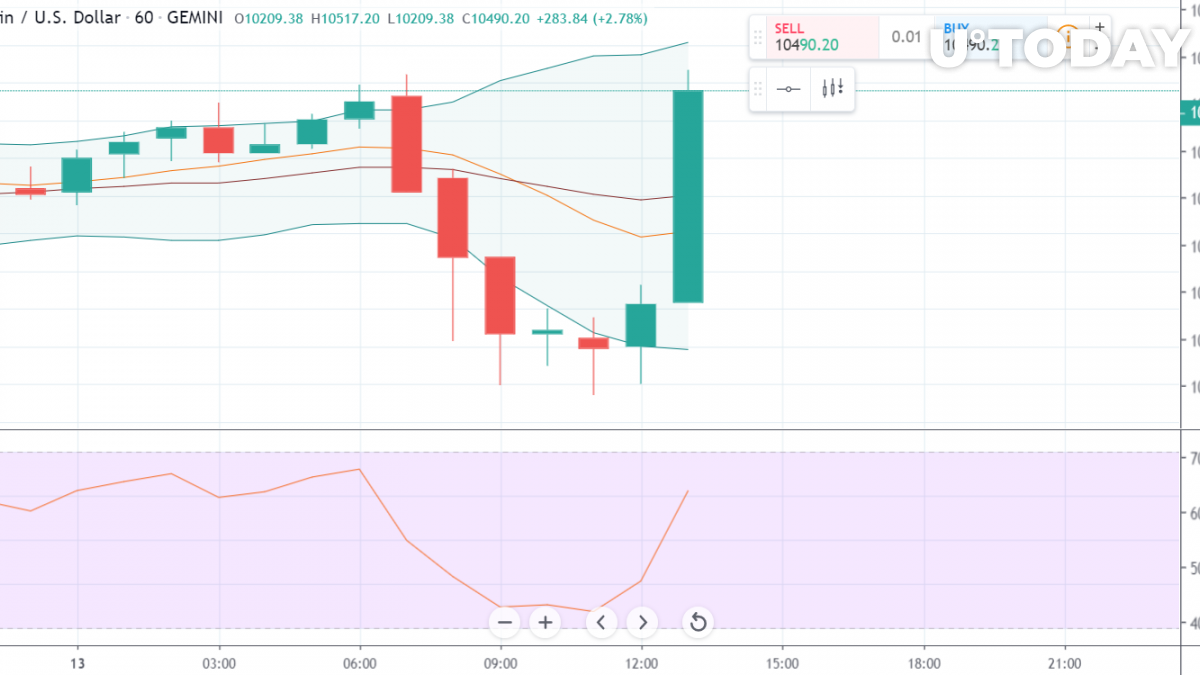 Still, the bulls shouldn't get too comfortable. As reported by U.Today, the trader who accurately called the January rally recently predicted a drop back to the $7,500 level.

Even though Bitcoin's safe-haven status faltered due to its massive crash in March, it still ended up performing way better than U.S. stocks in Q1.

According to CNBC's estimations, the Dow notched a 23 percent decline, which marks its worst first quarter to date. Meanwhile, BTC is only down 10 percent from where it was trading three months ago.

A brutal quarter for stocks

The U.S. equities market was on a roll in early 2020 when new all-time highs seemingly became a new norm during the longest-lasting bull market in history.

However, things took a dramatic turn in late February when it became clear that the deadly coronavirus was rapidly spreading all around the globe. From Feb. 24 to Feb. 28, global equities suffered their worst sell-off since the 2008 GFC and entered correction territory.

Things came to a head on March 17 when the Dow tanked by 2,997 points (13 percent), its biggest decline since the Black Monday crash that took place in October 1987.

The Dow and other major indexes have had a mild recovery, but investors fear that the rapidly growing number of coronavirus infections in the U.S. could evaporate recent gains.

Bitcoin shows its risk-on side

Bitcoin also started its Q1 on a high note by rallying all the way to $10,500 in mid-February. However, it finished the first quarter in 2020 in the red due to its abysmal price action in March.

With that being said, there is a good chance that Q2 could be much better for the leading cryptocurrency given its past performance.

As reported by U.Today, the correlation between Bitcoin and stocks recently reached a new high due to the global liquidity squeeze. However, Luno's Vijay Ayyar believes that it is still an uncorrelated asset that is yet to establish itself.

“Bitcoin is still a relatively smaller asset class that is increasingly uncorrelated to traditional asset classes and this is in the process of being established as we speak," Ayyar said.