John McAfee Turns His Back on Bitcoin, Refuses to Eat His Words if BTC Price Doesn't Reach $1 Mln 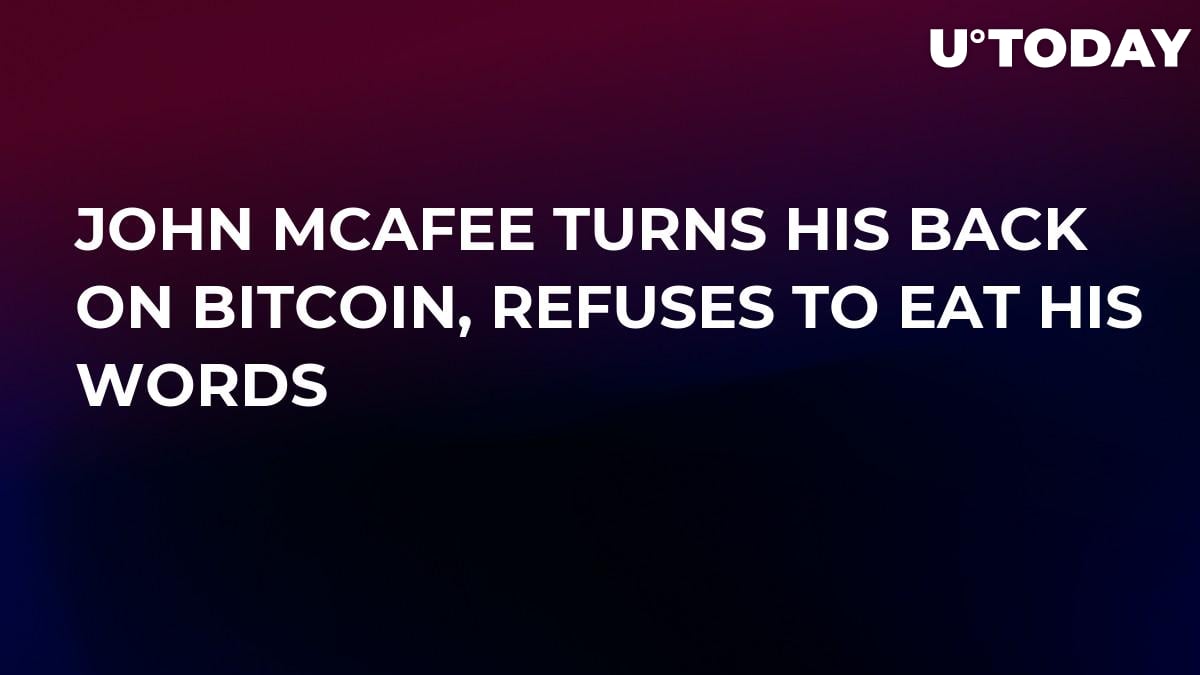 John McAfee has just backpedaled on one of the wildest wagers in the history of crypto. In his recent tweet, the cybersecurity tycoon makes it clear that his promise to eat his penis if the Bitcoin price doesn't go to $1 mln by Dec. 31, 2020, was simply a "ruse" that was meant to attract new users.

A ruse to onboard new users. It worked.

Bitcoin was first. It's an ancient technology. All know it.

Bitcoin is our future?

Was the Model T the future of the automobile?

Back in July 2017, less than six months before Bitcoin became the biggest topic worldwide, McAfee took to Twitter to make an unprecedented claim that he would eat his penis on national television if Bitcoin failed to reach $500,000. Five months later, he upped the ante with the now-famous $1 mln price target.

Throughout these years, McAfee continued to stand by his prediction. As reported by U.Today, he still insisted that BTC could end up in the seven-digit reality as of Dec. 13, 2019. At the time of writing, BTC is trading at $7,462, which means that its price would have to increase by 13,286 percent in twelve months for McAfee's body to remain safe.

His prediction became so popular that there is even the "Dickening" countdown till Dec. 31, 2020 (it is called after the reward "halvening" that will take place in May). However, now that McAfee claims that it was nothing but a ruse, this site might no longer be relevant.

Bitcoin and the Model T

Moreover, the eccentric septuagenarian has apparently had a change of heart about Bitcoin since he's now certain that the top cryptocurrency has "an ancient technology," and newer blockchains with privacy and smart contracts will effectively replace it. McAfee compared Bitcoin to the Ford Model T, which is generally considered to be the very first affordable car.

While McAfee himself did not mention any specific names in his tell-all tweet, the thread got instantly swarmed with people who wanted to pitch their favorite cryptocurrencies — from some top altcoins to obscure projects.

A bit later, he named privacy-focused coin Monero as the new clear winner. The cryptocurrency, which offers its users complete anonymity, is widely known for cryptojacking. However, Monero and other privacy coins are in danger of getting delisted from exchanges due to regulatory pressure.