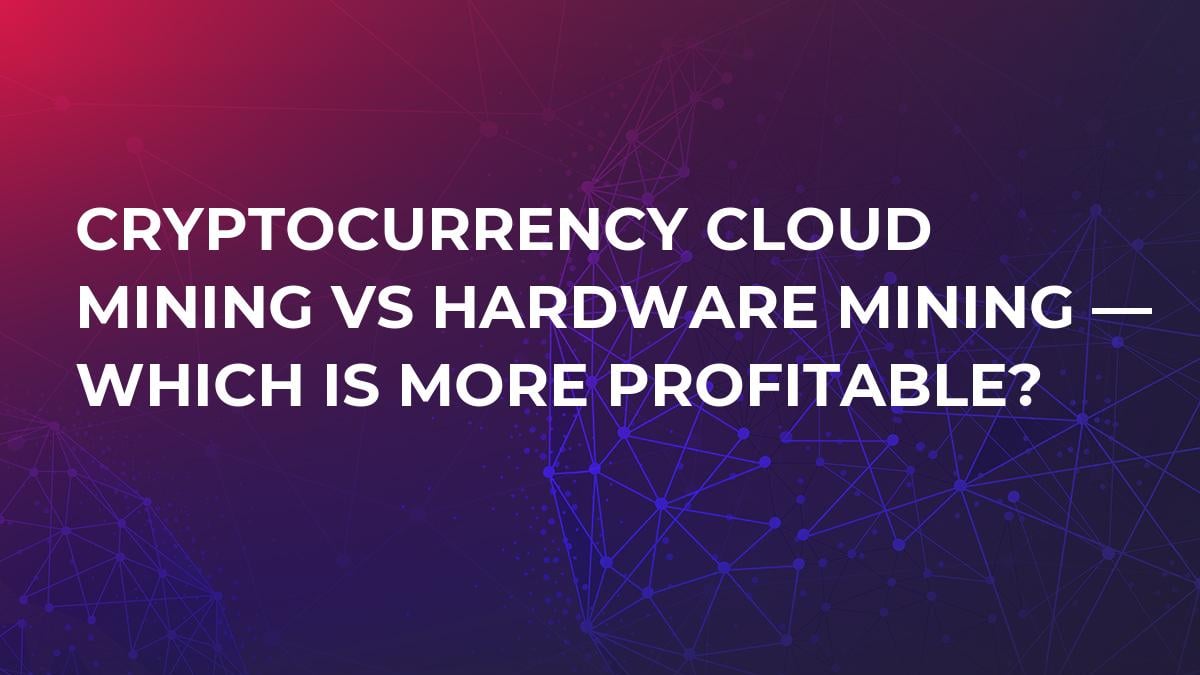 Bitcoin, Ethereum, Litecoin, and other less popular altcoins are now generating an immense level of buzz among crypto enthusiasts and this has caused the adoption of different cryptocurrencies to surge. Although the concept of mining coins is very appealing, there’s often the debate about which offers more profitability, cloud mining or hardware mining?

To really drive the point home, let’s understand what mining is all about.

What is cryptocurrency mining?

Before a cryptocurrency transaction can be carried out, it must be verified on the Blockchain network.

The process of validating the transaction on this network is known as mining and those in charge of the operation are referred to as miners.

As easy as this process sounds, it is a lot of work. In order to mine, a software which is able to compute cryptographic algorithms is required and to complete this, an enormous amount of computing capacity is needed. At the inception, mining was done on personal computers, but now, individual computers do not suffice.

And this is one of the drawbacks of hardware mining. It is quite expensive and almost impossible to execute individually. However, cloud mining is fraught with fewer risks and doesn’t require an exorbitant amount to start up.

Since the issue of money appears to be a pressing one. Let’s consider the cost of starting up cloud mining vs hardware mining.

Hardware mining requires a significant initial investment. Some of the factors which influence the cost of mining are discussed below.

The list goes on and on. Also, depending on how powerful you want your mining operation to be, the cost can go up significantly. Do you require an ASIC mining rig? One thing you’ll need to consider is that these cannot be repurposed. The implication is that if the cryptocurrency you mine decides to alter its hash algorithm, that signals the end of the mining rig.

In addition to this, most people start out with multiple mining rigs so as to justify the revenue they generate at the end of the day. You also need to consider the electricity cost where you stay and how much it’ll cost to cool your equipment.

In comparison to hardware mining, cloud mining appears to be simpler to compute. Some of the most popular cloud mining services, Genesis Mining and HashFlare, offer a monthly subscription model for users to purchase. This model is computed based on the cryptocurrency you intend mining and the hash rate of the network.

This new model then allows individuals to invest and purchase a part of a company’s mining power. Then, cryptocurrency is being mined without the issue of electricity bill, storage space or cooling equipment.

The battle of cloud mining vs hardware appears to be in favor of good old hardware mining and the reason for this conclusion will be delineated shortly.

We gathered sufficient information from reviews, several online ROI calculators, and cryptocurrency fora and we were able to come up with a definitive approach to assessing the ROI of cloud mining vs hardware mining.

It was discovered that ideally, after 10 to 15 months of constant mining, a miner who deals in hardware mining should recover a significant portion of the amount invested and should move on to the profit-making period.

Considering the fact that there are areas where electricity costs are low and the weather is halcyon, the time it takes to recoup investment might be about six to eight months. One thing to note is that cloud mining vs hardware mining offers two different sides to the story.

While hardware mining is initial investment heavy, cloud mining is all about recurring expenditure. The cost of purchasing a two-year contract for cloud mining ETH is about $1,520 at 40MH/s while it is as high as $12,960 at 360MH/s.

The time it takes to break even was recently calculated to be almost 11 years for BTC. Genesis Mining for ETH even demonstrated a worse ROI. It was estimated that it’ll take approximately 25,992 days for an average person to break even.

In view of the seemingly unfavorable time it takes for the operation to become profitable, what are the positives we can draw from cloud mining?

Hardware mining vs cloud mining 2018 is one of the most talked about topics. This is a topic where experts and cryptoanalysts take different sides, arguing about the cloud mining vs hardware mining profitability. Whichever technology you decide to employ, you’ll need to devote significant time and effort to carry out more research.