How to mine NEM (XEM): Profitable NEM Mining

George Shnurenko
Decide what kind of mining hardware you would like to use. Your choice solely depends on the cryptocurrency you want to mine. 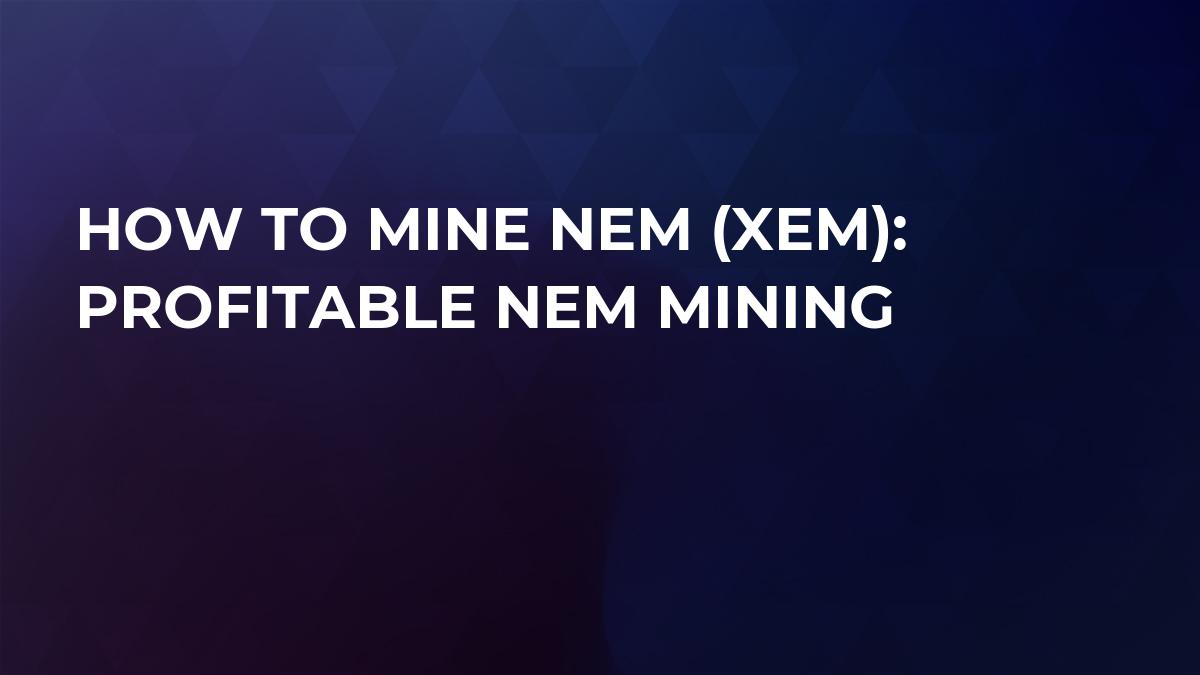 Step 1. Decide what kind of mining hardware you would like to use. Your choice solely depends on the cryptocurrency you want to mine. Despite the constantly increasing level of difficulty, there are still some fdcryptocurrencies that can be mined with ordinary computer (Bytecoin, Monero or Zencash). Of course, it will not bring you any substantial profit now, but there is still a chance that at least one of these altcoins will significantly increase its value in the future.

You have to invest in ASIC chips in order to mine Bitcoins. Before purchasing a mining device, you have to take into account such factors as its price, electricity usage and hashing power. You can use any specifically designed online calculator to find out the profitability of the miner. As of now, the DragonMint T1 is the most efficient and the most powerful mining chip on the market with a hashing rate of 16.0 TH/s. At the same time, this is the most expensive mining chip as well – it will set you back $2,729.

The DragonMint T1 could potentially help with the decentralization aspect of Bitcoin, since most of the Bitcoin hashing is coming from Bitmain’s hardware. The Antminer S9, Bitcoin’s flagship product, is currently the most popular mining chip on the market. It costs $2,320 and offers hashing power of 13.5 TH/s. Another option is AvalonMiner 761 produced by Canaan: its price is fixed at $1,860, but it offers only 8.8 TH/s. With thousands of miners purchased every day, the competition between different manufacturers keeps escalating. There is no doubt that we will see more powerful miners in the nearest future. For example, it has recently been confirmed that Halong Mining is collaborating with Samsung to produce new chips.

If you are not ready to invest in ASIC hardware, you can buy or build your own mining rig. Before purchasing a pre-build mining rig or separate motherboards, pay attention to the fact that GPU rigs are not efficient for Bitcoin mining in 2018. There is a chance that you will not be able to cover the cost of GPU even when you do not have to pay for electricity. Bitcoin’s difficulty is steadily rising, so it is hard to profit from mining even with ASIC hardware (not to mention FPGAs or GPUs).

There is also another alternative such as cloud mining. When it comes to cloud mining, there are two options: renting a mining machine hosted by a company or simply ordering a specific amount of hashing power. The profitability of cloud mining is significantly lower due to the fees charged by a certain provider.

Genesis Mining is the most reputable cloud mining company that actually came up with this business model in 2013. The price of 10 GH is fixed at $1,5. If you use Hashing24 or Hashflare, 10 GH will cost you $2,6 and $1,25 respectively. If you are looking for an advantageous offer, Hashflare will be your obvious choice since they offer significantly cheaper contracts (you can save almost 50% if you decide to buy 100 GH). However, Hashflare sets significantly higher long-term charges than Genesis Mining. Therefore, the choice definitely depends on your investment strategy. Hashing24 stand outs among the other cloud mining services because of its close collaboration with the Bitfury Group, one of the biggest companies in the cryptocurrency business (that explains the high cost of hashing power).

You can make money off cloud mining by meticulously calculating the potential profit. As it gets more and more difficult to mine Bitcoins, it is not advisable to sign long-term contracts: cloud mining only tends to bring profit for a couple of months. You also have to be aware of the risks associated with cloud mining. There are numerous fake cloud-mining services which may lure users with cheap contracts.

Step 2. Create a Bitcoin wallet. After choosing the most suitable way of mining, you can proceed with creating a Bitcoin wallet for storing your coins. Bitcoin wallets are divided into hot, semi-cold and cold. Hot or online wallets are not recommended due to security concerns, so it would be better to download a software wallet (semi-cold), buy a hardware wallet or print a paper wallet (both of these are considered cold wallets).

Step 3. Choose a mining pool. As mentioned above, it did not require a lot of processing power to mine Bitcoins 5 years ago – practically any GPU could solve a hash puzzle. As Bitcoin grew more popular, its value increased along with the mining difficulty. Miners with weak hardware decided to unite in order to mine Bitcoins together by creating a so-called “mining pool”. Miners collectively solve a cryptographic problem and proportionally share the block reward taking into account the amount of computational resources they contribute.

You can still prefer solo mining, but you will need extremely powerful hardware to successfully mine Bitcoin alone. However, there is no need to pay any charges with solo-mining, and, in case of successfully solving a block, a miner gets 100% of the block reward (which is obvious because only his computing power was used). Solo mining also offers more security, but at the same time there is less stability – you may fail to earn a single coin for an extensive period of time.

Among the most popular mining pools one can mention AntPool, BitMinter, BTC.com or Slush Pool. Slush Pool is the oldest mining pool that is also AsicBoost compatible. The AsicBoost technology increases the speed of mining by almost 20%. In order to start mining, simply create an account and set up a worker. As a rule, there is only one worker per one computer, but you may create more if there is such a necessity.

Once you start earning BTC, you may want to withdraw them into your wallet. Just simply choose the 'Payouts' menu to add a new wallet by entering your public address. Each mining pool has a certain payout threshold.

Since mining pools are often targeted by hackers, it is important to make sure that the miner establishes an encrypted connection with the help of SSL. If that’s the case, you will see a SSL indicator (a green padlock icon near a website's URL).

Slush Pool also allows its users to enable TFA. In order to login to your account, you will have to use the Google Authenticator mobile application or simply receive an SMS.

Step 4. Download mining software. GUIMiner is the most preferable option for inexperienced miners because of its user-friendly interface. Once you have installed the software, pay attention to the “Server” option. Simply click the dropout box to choose your mining pool (Slush Pool, for example). After that you will have to enter your username and password. The last thing that you have to do is to select your GUI miner and click “Start”.

Now pay attention to the bottom status bar. On the right side of the status bar, you can see the current hash rate while the number of shares is displayed on the left. The bigger amount of shares you contribute, the bigger reward you get.

If you want to boost the performance of your graphic card, you can add extra flags. These configurations allow users to enable vectors, reduce temperature, etc. Make sure that you choose only those flags that match your hardware in order to reach the maximum level of efficiency. Another good way to accelerate your GUI is overclocking. There are numerous graphic card overclocking utilities that you can use (MSI Afterburner, EVGA Precision XOC and so on). Every graphic card should be overclocked separately. Check that the hashing rate wasn’t affected by the overclocking.

Step 5. Cold down your system. It is a commonly known fact that the performance of the mining hardware depends on its temperature. For example, the most powerful ASIC miner DragonMint T1 can reach its maximum hashing power (16.0 TH/s) only if the temperature doesn’t rise above 25°C.

Those miners who live in hot climate may consider installing an AC unit inside their mining room. Your AC system should be powerful enough to keep up with the heat output, but that comes with a big disadvantage – air conditioning adds at least 35% to your electricity bill.

Big mining companies usually use immersive cooling for rapid and efficient heat removal. The mining equipment is submerged in special non-corrosive and non-electrically conductive cooling liquid. Such an innovative technology was introduced by 3M Novec.

The excess heat that is being generated by Bitcoin miners can now be used for heating your home or even growing vegetables. A Czech exchange service has recently introduced a startup that combines cryptocurrencies and agriculture.

Step 6. Make sure that Bitcoin mining remains profitable. Nowadays, amateur miners can hardly make any significant profit without large initial investments in ASIC chips. Numerous data centers based in countries with inexpensive electricity (Iceland, Russia, China and so on) have established a big mining monopoly.

Bitcoin mining becomes less profitable due to its rising difficulty and proportionally rising electricity expenses. While there is no way to make Bitcoin mining easier in the ASIC-era, you can still try to reduce your electricity expenses. If mining is your major source of income, you may seriously consider moving to another country with low electricity prices. You can also try to build a solar-powered mining plant – solar panels will offset the energy consumption. However, the efficiency of solar energy for Bitcoin mining depends on a number of factors such as the amount of solar radiation, the surface, the angle and so on.

As of now, it is more advisable to invest small fractions of money in different altcoins, since most recent trends show that their value may significantly rise in the future. Of course, you may still buy Bitcoin mining hardware, but first you have to determine your potential income with the help of any mining profitability calculator.