What is IOTA (MIOTA) - Simple Explanation for Beginners 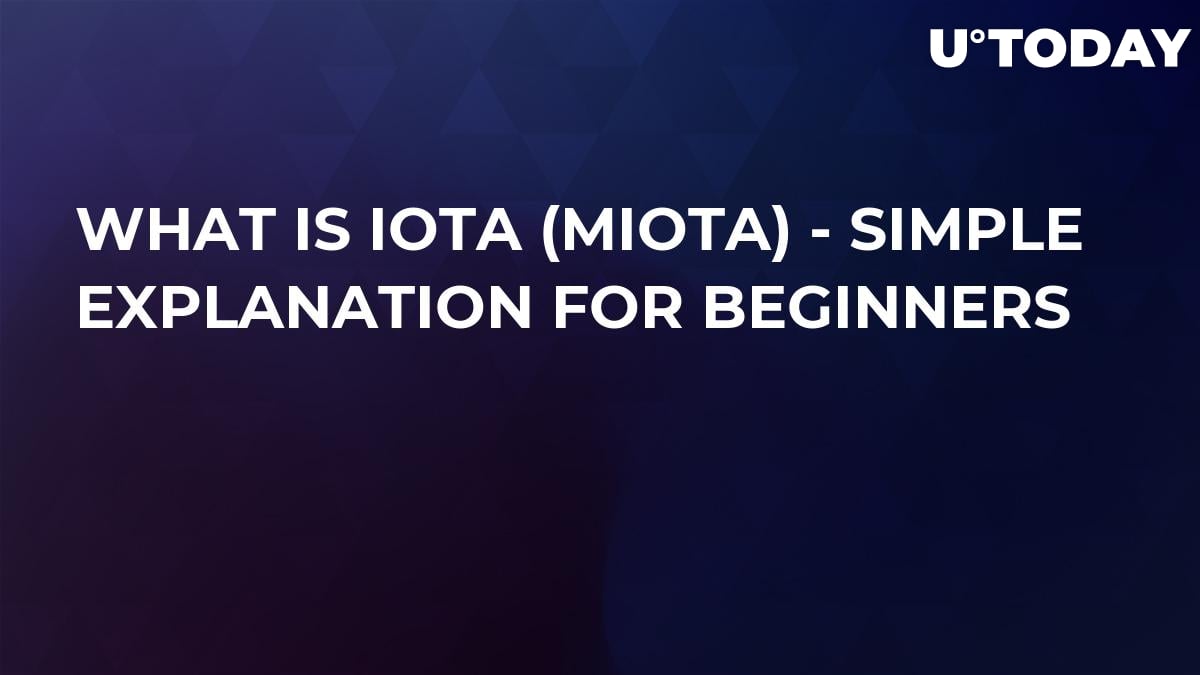 IOTA is an abbreviation that can be expanded as Internet of Things Application. This new crypto-technology was founded in 2015 to alleviate secure transactions and data base transfer between gadgets on the Internet of Things. It is also created to make transactions between devices, assisting the progress of an entire machine-to-machine micro-economy. How does it work? Eliminating the block and chain, IOTA dispenses with the commissions for payments and solves scaling problems. To make a buying/selling deal to the IOTA ’’account book’’, two other preceding transactions need to be verified. The advantage of such check is the absence of any main ledger, therefore miners don’t have to join the web.

As the machines on the web confirm one another’s operations in a random manner, they consent via the net of contacts between deals. This form of confirmation is called DAG (Directed Acyclic Graph). The IOTA designers name it the Tangle. Rapid and free transactions through IOTA are possible, since computational power in the DAG grows as the net increases. IOTA is a new budding technology, still it is being sometimes criticized. Further you will learn about the IOTA principles of operation, what it may be used for, and whether the token worth investing, considering the opinion of critics.

Block time/pay off: Without blocks, check two preceding transactions to process the transaction.

The Problem: Machine to Machine Payments

The Internet of Things has already become a main powerful world’s economical boost. Firms design different gadgets, such as sensing transmitters, video cameras, to control, observe situation in plants, shops, shipping lanes and berthing space. Gartner’s investigation showed a big growth of IoT up to 8.4 billion apparatuses for the last several months. And forecasts for its further growth are rapidly changing. IOTA’s is to be the operating floor for machine-to-machine operations Creators of IOTA insist that IoT will be most useful if the apparatuses share and assign resources more thoroughly. It is meant that the devices should be able to buy more electricity, frequency range, depository, or information when they need it, and exchange those means when they are not required anymore. Probably there might be thousands of operations per minute.

IOTA’s creators insist that subject to this proviso block-chain technology isn’t enough for IoT app. Block-chain networks fight with the ability for scaling. Thus, they frequently charge commission from miners so that they could include a transaction in a block promptly. IOTA intends to solve both problems (scalability and commissions) by means of its new net, to enable a great number of IoT apparatuses to use it.

Ability of scaling: IOTA differs from a Block-chain technology As it is planned that IOTA will carry out billions of web’s nodes once completely realized, the creators had to develop a network on which computational capability grows along with quantity of the net’s nodes. To realize this purpose they developed the Tangle, according to which the device that provides a new transaction shall initially check the pair of previous payments on the network. For each check, the verifier executes checking of the operation connecting transactions into the general Tangle.

The sense of the Tangle is that consent is reached on the basis of a network of checks. Every payment is connected to previous pair of payments which it checked, and later on it is to be in connection with the next payments which check it. Thus, the network does not rely upon a main blockchain anymore and there is no scalability problem. Every other gadget on the network provides its computational power to the web while providing a transaction. There is no block mining, all the crypto-coins on IOTA are designed on the basis of the network.

Since you provide computational capability to the web when you make a transaction, the expense of use of the web equals to the electricity necessary to check two other transactions on IOTA. The Tangle enables IOTA to work without fees, so the network becomes more distributed – between every acting node. Zero commissions is an indispensable condition for a mission of IOTA to service IoT devices.

Apparently, the machines will often transact at cents. Micropayments would be impossible with commissions from such minor deals. To be the “trunk” for the M2M economy, any commissions should be eliminated. 34% Attacks & Coordinator Blockchain technology is so structured that a blockchain is open to attack if one side has 51% of the computational capability on the net.

Being at this stage, in theory, a bad actor has a possibility to create and check faulty transactions. And due to the Tangle structure, this rate is only 34% of the computational capability on the network. It means that you would have to find the “nest” first in this complicated network of nodes. Early is the moment when such a threat is most possible. As the early network is minor, it has less nodes, therefore, it’s more simple task for an aggressor to gain a 34% share of the web.

Then, a “Coordinator” is used to fight with the threat of being attacked. It is the only way to safety early on, and IOTA will get rid of the Coordinator as soon as the net is rather strong. It means that the system and currency are now centralized, and in case you make a decision to invest in this technology, you should rely on the IOTA Foundation. Proprietary Technologies There are both favorable and bad responses for the use of new technologies while developing the operating floor. Initially, IOTA used its own hashing feature named as Curl for all checks of operation and key creation.

And though the verification of operation hashing has already changed to a more common protocol SHA 3, IOTA nevertheless uses exclusive Curl hashing feature for other applications. IOTA applies trinary logic, not binary. Use of three-states processors means superiority in productivity and computational capability in general. IOTA works in close cooperation with the JINN Labs on hardware for IoT apparatuses which are capable to computation in trinary. Concerns, weak points, & Critical analyses

A number of experts in crypto technologies called in question viability of IOTA as a platform. Realization of a great number of new technologies at once of course provokes weak points or defects in implementation of IOTA. The technology behind the IOTA just was not tested enough to be sure it will work in scale and whether it is able to combat attacks. Critics of IOTA are most of all concerned about the lack of tests, expert review. A destroying article outlining critical safety defects of the Curl hashing function was recently published by MIT and Boston University. The community and experts look down on the idea that everyone can "roll your own crypto". Good cryptography requires years on development, testing and expert review.

The development of the hashing algorithm SHA 3 took nine years. The experts have expressed their concern that IOTA's creators preferred creation of their own cryptography to using the common standards. Such problems led to quite an variable price for the IOTA currency. But one should keep in mind, however, that any new technology passes through technical hindrances and painful growth.

Bitcoin had Mt. Gox scandal, and Ethereum withstood cracking of DAO. The technology and implementation behind IOTA, of course, will change. Before making the decision on investment of capital in IOTA crypto-currency, potential investors should consider its overall structure and history of the development team.