How to Hack Bitcoin: All Possible Ways

George Shnurenko
From phishing to Trojan transfers, here are all major ways to hack your Bitcoin 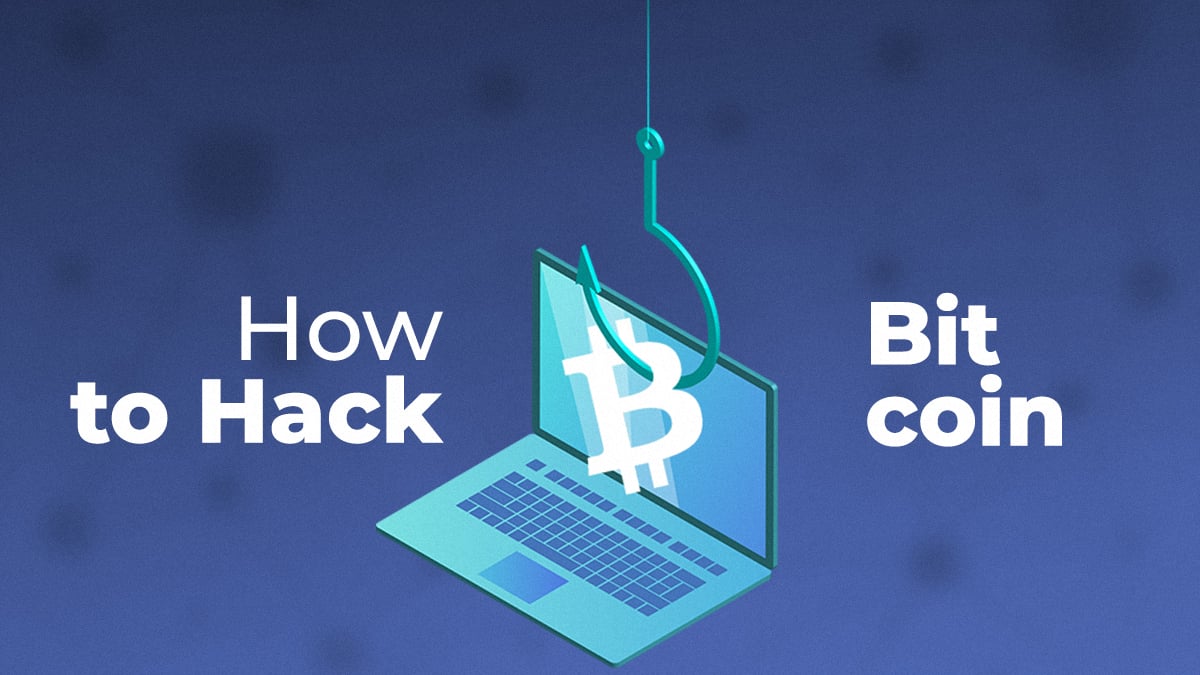 Bitcoin and other cryptocurrencies took the world by storm in the recent Blockchain boom. It was all over the news and everywhere people talked and traded Bitcoin.

However, when it comes to the security aspect, Bitcoin users don’t have a second thought before pointing out that the cryptocoin can’t be hacked. But, quite unfortunately, that’s not exactly the case as the hackers have been able to steal away Bitcoins worth millions of US dollars over the years.

And, if you are also interested in finding out how to hack Bitcoin or how to hack someone's Bitcoin wallet, here we have listed all the possible options that you can try. Let’s find out.

Before getting into the details of how to hack the Bitcoin wallet, you should first understand that Bitcoin is nobody’s property.

Blockchain, the Bitcoin public ledger, maintains a record of all the addresses and a certain value is then attached to the particular key that identifies each record.

So, when someone owns Bitcoin, what they actually have is the private key for unlocking a particular address on the Blockchain.

These keys are stored both online and offline in so many different ways and each of them has a certain security level. Nevertheless, they all are vulnerable because, as you want to know how to hack a Bitcoin wallet, all you have to do is to somehow access that character's string which forms the private key.

Most of the time, it’s the online services being responsible for storing private keys that get attacked. Sheep Marketplace is a perfect example of such service providers. Mostly, it’s the insiders who carry out such attacks as they don’t even need to know the hacking thing at all. All they need to do is to copy the entire database containing private keys to own the Bitcoins located on all the addresses stored in the database.

You can also do the same if you’re an insider and know how to break into the database. And, once you do, you’ll be able to spend all the Bitcoins anywhere you like.

It’s the malware that records the keystrokes of the users and sends it all to the hacker. It is almost impossible to detect these programs and you might even have it running on your smartphone or computer right now without noticing it at all.

They copy every seed, password and pin that you type and can turn out to be an effective answer to the question of how to hack a Bitcoin faucet. They can really provide hackers an easy gateway to all the bitcoins they want to hack.

Usually, there are three different options available for installing keyloggers. They include:

·         Create a malicious site for installing the software

·   Distribute it by loading onto a USB and then dropping them off at some Blockchain/Bitcoin conference. The malware will simply be downloaded to one’s computer as they insert the USB for checking out what’s in there.

Another cool option you have to answer how to hack Bitcoin wallets, this one gives you a more sophisticated way of achieving your goal. It also needs you to do some work on your part as these fake wallets are simply the apps which resemble genuine wallets but are meant to steal the Bitcoins away.

These apps typically use official logos and everything else of existing Bitcoin wallets for tricking the users and stealing the Bitcoins away. These fake wallets are a routine thing both on Apple and Android App Stores.

For those looking to find out how to hack Bitcoin faucet, another option is to rely on some Bitcoin miner malware.

Every Bitcoin that gets mined makes the creation of the new Bitcoins harder. You need electricity for running and cooling down those ‘miner’ computers. And with electricity being a major operational cost for Bitcoin miners, many of them borrow resources for mining Bitcoins. They usually do so by spreading the Bitcoin mining malware.

Today, Bitcoin is simply mined through the biggest Bitcoin malware botnets. Though they don’t have any negative intentions, still the use of a computer this way is not authorized as they tend to hijack the online video equipment and the victim bears all the cost. As a result, the hijacked computers are also slowed down as well.

Want to know how to hack Bitcoin accounts, why not try Bitcoin phishing? It’s a popularly known method for information theft which relies on fake websites or emails for tricking users into providing their private keys.

Another option for you is to impersonate as a Bitcoin recipient. Lately, most Bitcoin hacking happened when the companies held fundraising events in the form of ‘initial coin offerings’ asking investors to send bitcoins to them. Now, that’s where you get the answer to the question of how to hack a Bitcoin address.

Clever hackers can impersonate as companies looking to receive the Bitcoin by setting up fake websites and persuading investors to send them Bitcoins worth millions of US dollars in their own Bitcoin wallets rather than the ones being used by the actual companies. And, once the Bitcoins are transferred to their wallets, there’s no coming back.

The value of cryptocurrencies is usually stored in the file stores called wallets. However, these wallets can sometimes be manipulated, compromised, transferred and stolen similar to any other value store we have on our computers.

What’s even worse is that people tend to forget the protective passwords or their hard drives keeping the store get stolen which renders these value stores to become inaccessible forever. The same sort of issues can be caused by Ransomware. And, once this happens, it’s not possible to access the wallet using another computer.

Now, that’s what hackers usually take advantage of. In fact, a popular question among hackers last year was how to hack Bitcoin wallet 2017. Even today, hacking attempts are made on the online wallets and many even get successful. So, if you’re also trying to achieve the same, you can also give it a try.

Another option available to those looking to find out how to hack a Bitcoin address is to transfer Trojans and simply get Bitcoins transferred to their personal wallets. The cryptocurrency Trojans are meant to monitor computers and wait for anything that looks like a crypto account number.

And, as soon as they spot one, they take action and replace the user’s intended account from that of the hacker and as soon as the user hits that ‘Send’ button, all the funds are transferred to the account of the hacker. Again, there’s no recovering from this either.

So, these are all the possible ways to hack Bitcoin. In fact, more of them can be discovered as hackers continue their attempts to steal away Bitcoins from their owners.

You can buy a safe Ledger wallet by using this referral link.