Ethereum (ETH) Price to Run for $290 Should It Break Above $231, Crypto Trader Believes

On Thursday last week, the Ethereum price broke above the psychological barrier of $200 and by now has increased to the $224 level without pullbacks.

Many traders believe that Ethereum has now entered a bull market and expect the price to keep soaring.

Meanwhile, an Ethereum-based dApp, Audius Music, has been exposed on the AppStore’s Twitter account to its 4.5 million followers.

Trader ‘CryptoWolf’ is of those who are bullish on the ETH price. He believes that breaking above the $231.20 weekly resistance would prompt the second-largest cryptocurrency to start heading for a much higher level - $290.80.

He also assumes that, prior to that, ETH may pull back down to $210 which, he says, would be a good buying opportunity. 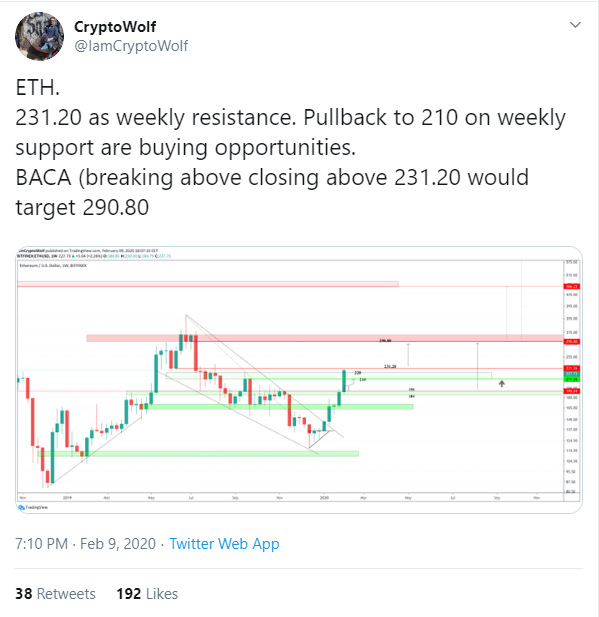 On February 9, the 4.5 million users following the AppStore’s Twitter page became acquainted with an Ethereum-based audio streaming application called Audius Music. The dApp acts as a platform for musicians to share their tracks directly with an audience and monetize it without any intermediaries.

The music biz has definitely changed since the days of 45s, 8-tracks, and CDs.

The description on the dappxplorer page of Audius Music says:

“Using advanced blockchain infrastructure, Audius enables hard working artists to distribute, attribute and monetize content. Giving them new power over their music. You can engage directly with fans, build a community and receive insights about your followers.”

‘SoundCloud on the Blockchain’

In 2018, Audius raised $5.5 million in investments to build the dApp. It was founded by DJ and entrepreneur Ranidu Lankage.

Users need to pay artists in the local token, which they can either buy or get as a reward for listening to adverts.

Basically, Audius is an alternative to SoundCloud and Spotify on a distributed ledger.