Ethereum (ETH) Price Prediction – When to Invest in ETH and Expect a Breakout?

Ethereum seems to be stuck in its price range, but traders don't lose optimism and continue to hope for a breakout. TradingView experts aren't an exception. What do they think about the future of the ETH price? Let's take a closer look at Ethereum short-term price predictions and perspectives.

We anticipate a move in the upside 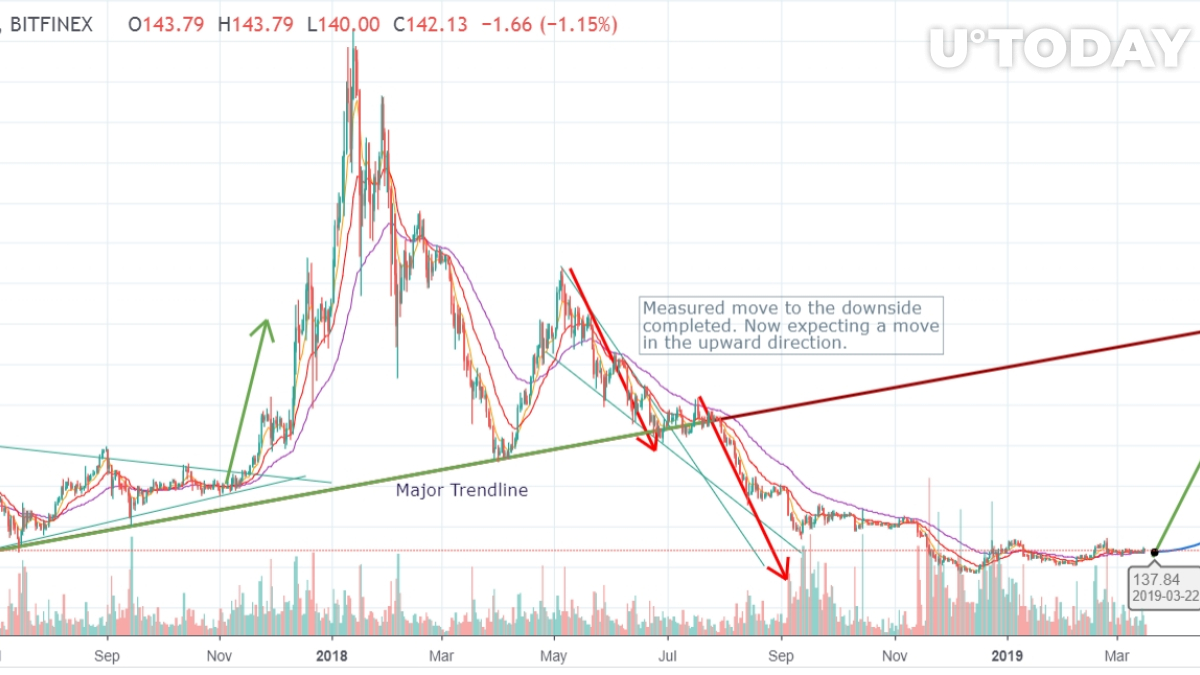 According to arsenowhisp, Ethereum seems to have completed a measured move to the downside and has been trading roughly in a range. Now, we’re waiting for a move to the upside, a temporary pullback followed by a target in the medium term to the major trendline (previous major support level).

The target ETH price is $596 in July 2019. For things to be kicked off, we need Ethereum to reach the major $200 resistance level. At the moment, this ETH price prediction seems to be an overestimation of Ethereum’s potential, but who knows.

Ethereum is to reach $200 in two steps 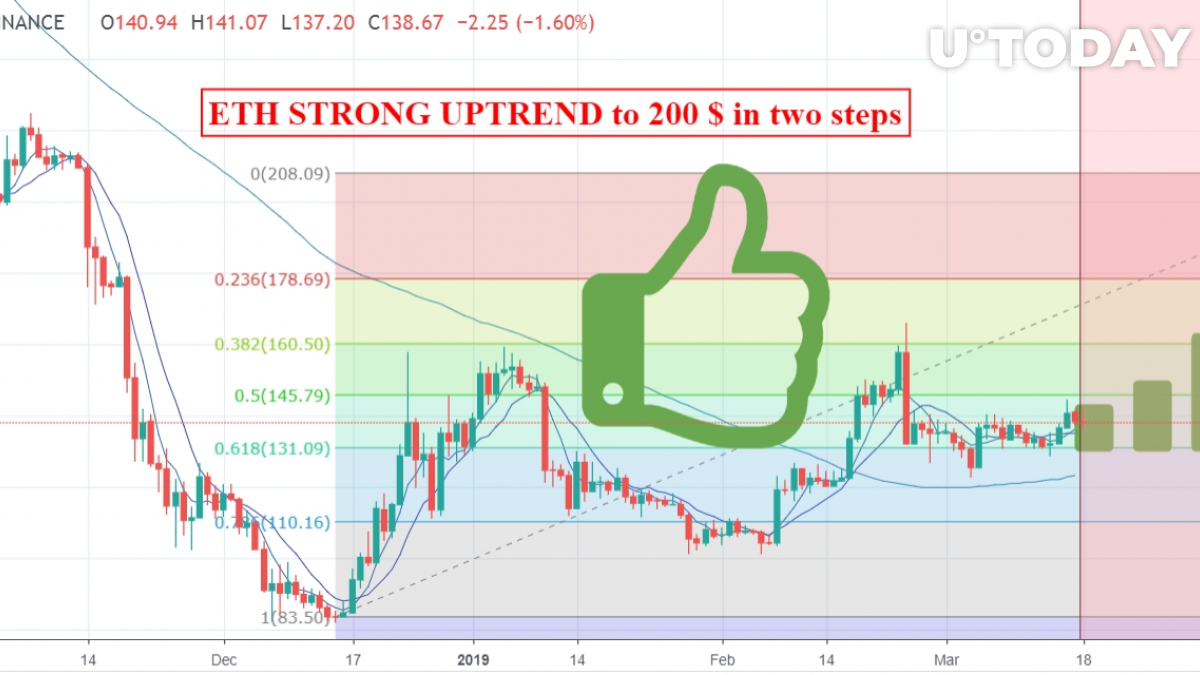 The user nicknamed milanjelic decided to compare BTC and ETH prices and based his forecast on Bitcoin’s price affecting altcoins. So, what do we have here?

As we know, Ethereum stayed the number 2 cryptocurrency by the market cap during "great depression on Bitcoin" ($3,200/per Bitcoin): then it was worth $82. Upon Bitcoin’s recovery, it was among the first one uptrending and gaining $82-157 (while Bitcoin was moving toward $4,200 and failed in the "previous round").

If we analyze the nominal USD gain, it’s the profit of 91%, which is very impressive for the world’s second cryptocurrency. Right after Bitcoin’s declination, Ethereum deflated over Bitcoin and Bitcoin sank towards $3,500, making ETH worth around $101.

Now, upon this bullish move on Bitcoin, and further continuation of bullish momentum on BTC, Ethereum initiated an upward move and is continually making higher lows and maintains those levels as trying to reach higher and higher levels.

Judging by this analysis, if ETH manages to stay above $135, it’ll continue the uptrend. It generally looks bullish, and technical indicators (MACD, RSI) approve it.

We should note that Bitcoin’s initial impulse should be higher than $4,240-4,250, that could equate up to $171 per ETH and after declination previous level breached will be retested (lower than $157 per ETH since Bitcoin will make retrace back to $4,000 as piercing it. That's a rebuy on ETH and sell on BTC $4,450 equivalent which should equate up to $196 safe exit.

The resistance is just too strong 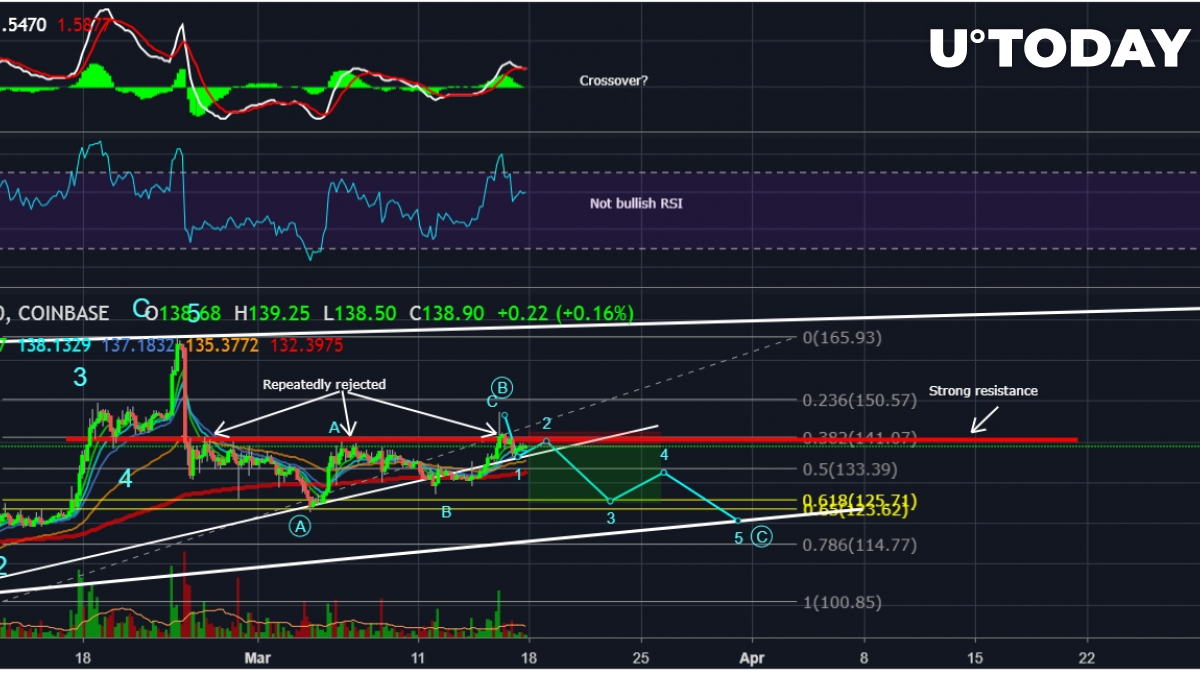 The user Vortexx analyzed MACD and RSI indexes to make his ETH price prediction. As we see, there’s the B wave probably forming (ABC pattern). At the moment, the resistance stays too strong, and we aren’t likely to see it broken in the near future. Neither the MACD nor RSI look bullish.

How to make a profit then? Here’s what Vortexx offers:

“In case that I am wrong, I will put stop loss just a little above that super resistance. My first target is Golden pocket (0.618 - 0.65 Fib), you can also play that major support where I think C wave will be formed.”

As we see, it's not all lost. Even though its moving sideways, Ethereum doesn't fall dramatically. We continue waiting for another breakout, and there's still a chance for it to happen this March.

As expected, a sharp decline of the cryptocurrency market has occurred. The rates for the majority of prospective coins have gone down, and all of them are now in the red. 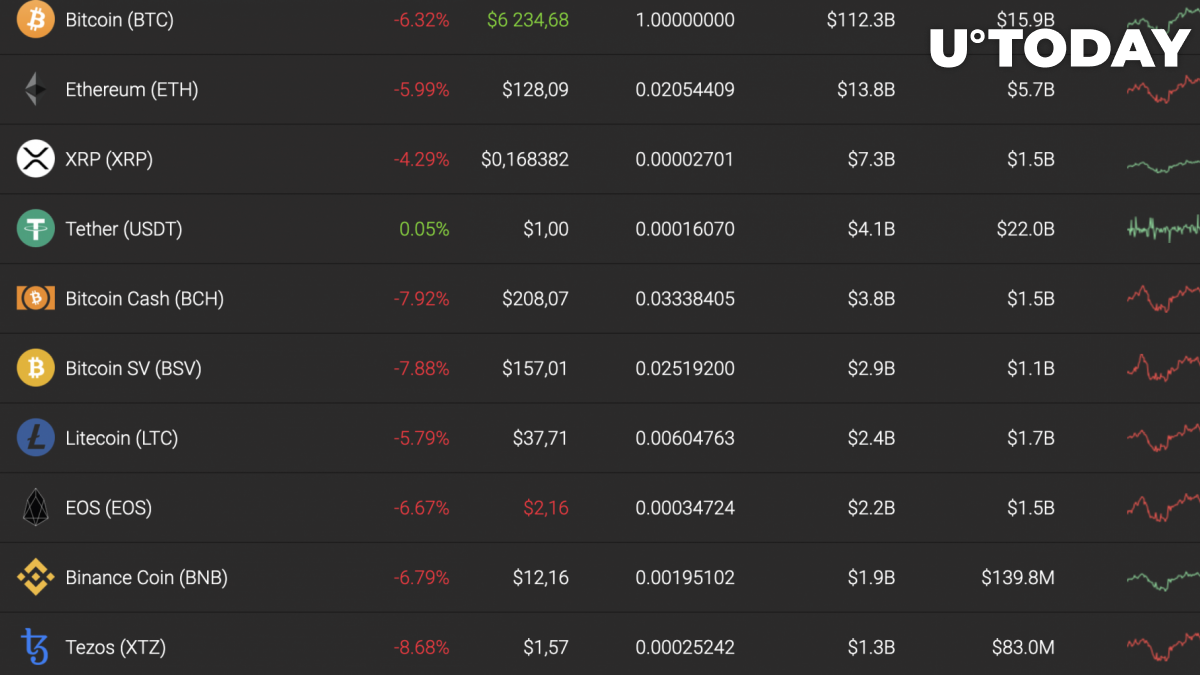 Below are the main features for Bitcoin (BTC), Ethereum (ETH), and XRP:

Our most recent Bitcoin (BTC) price forecast came true as the growth was not accompanied by the trading volume. Instead, a sharp decline took its place to $6,000. 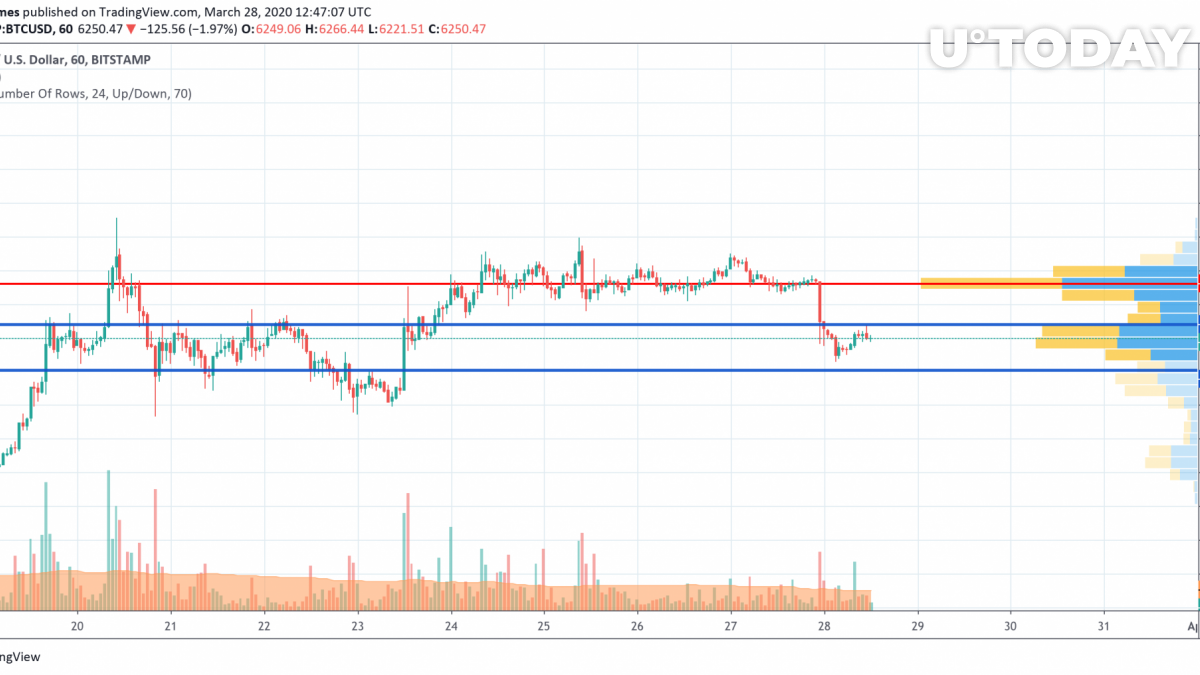 Looking at the 4H chart, the main crypto is currently trending sideways despite yesterday's decline. The $6,000 level serves as strong support based on the high buying volume.

In this case, the rate is unlikely to fix below this area. As a short-term projection, Bitcoin (BTC) is about to trade between the between $6,000-$6,350 range, which is mentioned on the chart.

Ethereum (ETH) has accompanied Bitcoin (BTC) concerning yesterday's decline. The decrease in price for the main altcoin has constituted 5.47%. 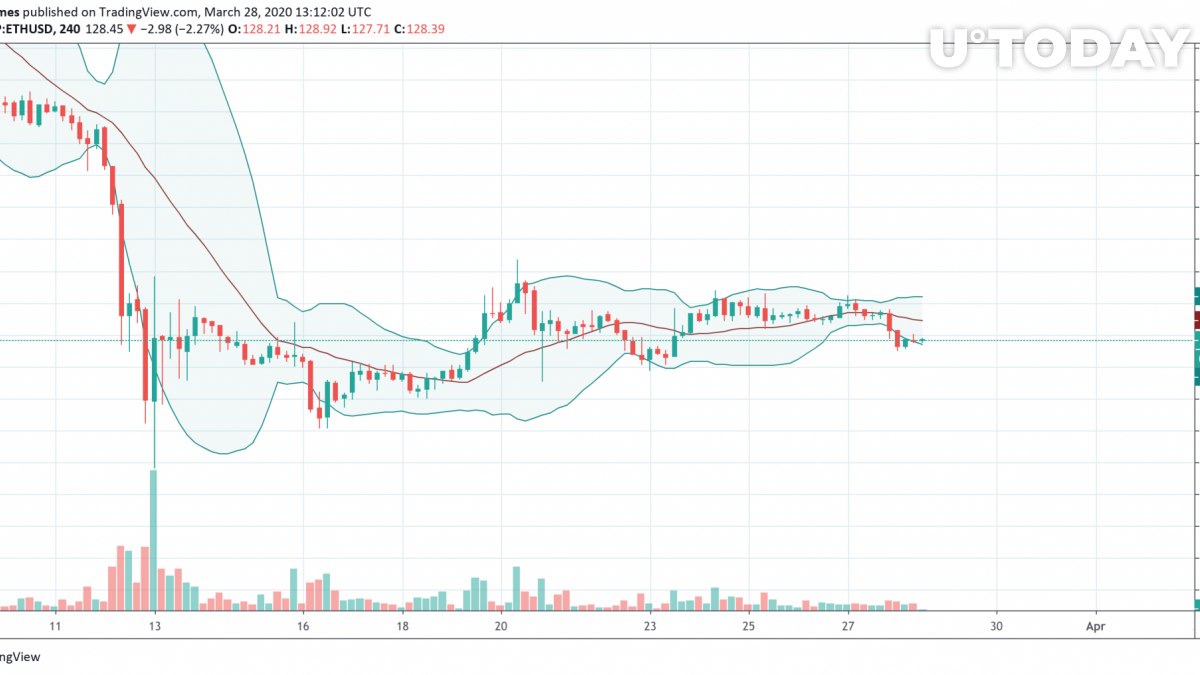 Ethereum (ETH) is also unlikely to face a continued decline. According to the Bollinger Band, the coin is about to break out shortly. However, the liquidity is low on the weekends is low and a sideways trend prevails. To sum it up, Ethereum (ETH) is going to be located between its support line at $128.39 and the resistance level at $141.

XRP has shown the smallest price decrease compared to Bitcoin (BTC) and Ethereum (ETH). Its rate has gone down by 3.20% since yesterday. 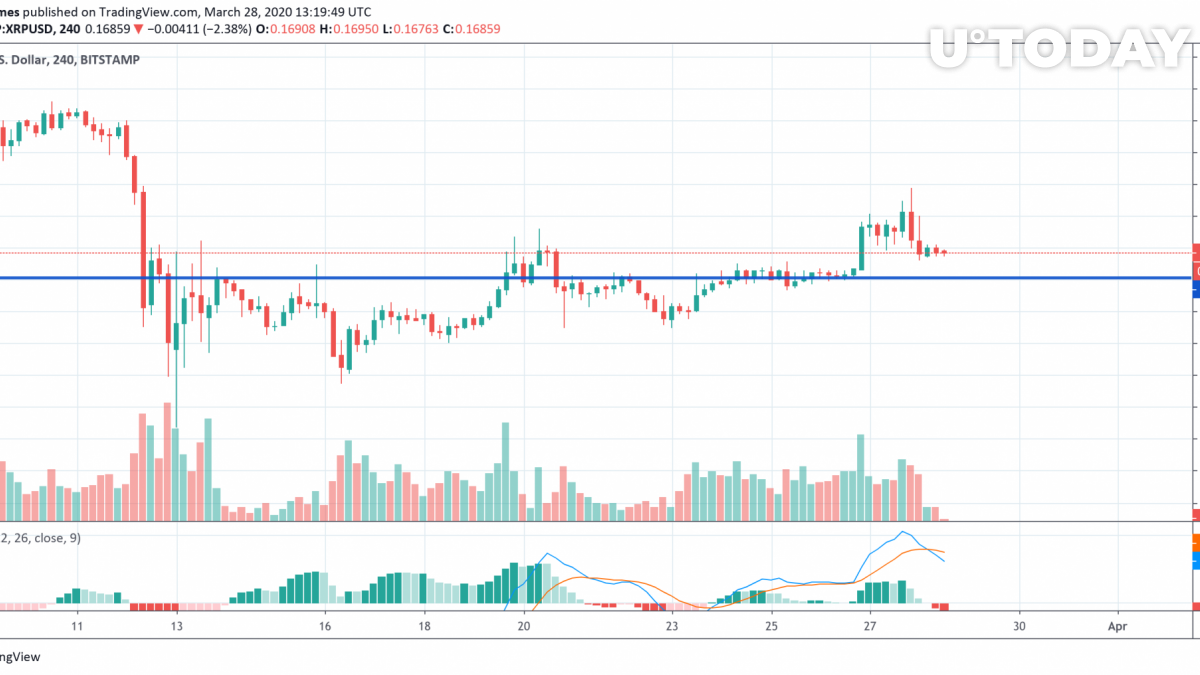 Even though the rate of XRP has fallen the least, its trend is more bearish than Bitcoin (BTC) or Ethereum (ETH). Looking at the 4H chart, the lines of the Moving Average Convergence/Divergence (MACD) indicator has just entered into the red, confirming the presence of bears. Furthermore, the selling trading volume remains high. All in all, XRP holders might expect the rate to move near its support zone at $0.16 shortly.