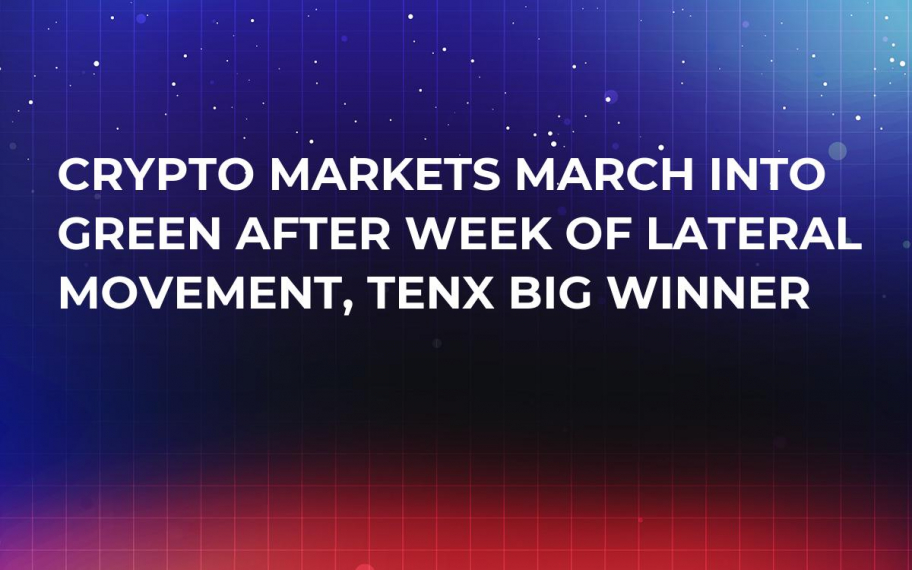 Having already broken away from its support around the $6,200 mark before, traders were disappointed to see Bitcoin slump back there about a week ago. However, after a week of sitting steady, it seems as if there is another small rally on the cards in the early stages of this week.

While the bigger coins, like Bitcoin and Ethereum, have seen gains of around five percent, the biggest winner recently has been TenX, which is a platform aiming to make cryptocurrencies as easy to spend as fiat, they are up nearly 40 percent over the last 24 hours.

Overall, there has been a slew of positive news recently that has helped the markets go green. From optimism in the face of lagging prices from Brian Kelly, Ran Neu-Ner and Tom Lee, Dash teaming up with a large US ATM network, and the Shanghai Stock Exchange mulling the use of  Blockchain technology.

The most recent bog positive piece of news has to be that asset-management giant BlackRock confirmed that it has established a working group to explore cryptocurrencies and Blockchain technology.

This week’s latest gains are again being powered by the head of the cryptocurrency market, Bitcoin. The original digital currency as seen gains of over five percent in the last 24 hours and this is being mirrored in the rest of the top 10 with only a few percentage points either way difference.

The reasoning behind this steady growth which has seen Bitcoin bounce back to about $6,700 is being explained as general market positivity for cryptocurrencies. It is not only Bitcoin that is picking up the positive vibe, but a collective grouping of good news; Dash, Blockchain technology, ATM integration and positive sentiment from cryptocurrency influencers are all helping.

While there may be a solid uptrend of about five percent at the top, some other coins are riding this wave a lot harder. TenX has made impressive gains, up almost 40 percent in the last 24 hours.

TenX has been striving to get itself onto Binance and some see this as the reason for the latest pump, however, it also had a situation on Bithumb, in Korea, that could be inflating the price suspiciously.

Bithumb was recently hacked again and because of that, it suspended newly added deposits. This seems to have created an internal anomaly which showed the value of the TenX token (PAY) go over $4. It is currently at $1.26 with the price bump.

Start of something big?

Investors and traders are still waiting for a rally to really get excited about in 2018 as the markets go up only to go down even lower. However, there is evidence in the charts that if $6,595 can hold support, Bitcoin could rise to just over $7,000.