The price of the Cardano (ADA) cryptocurrency has been on a rollercoaster ride through Q4, 2019. Maybe new highs are in store?

Seasoned trader and analyst Michael van de Poppe, well-known for his brilliant short-term predictions on Bitcoin (BTC) and altcoin price moves, has disclosed his forecasts for the Cardano (ADA) trading pairs with Bitcoin (BTC) and the U.S. Dollar Tether (USDT). Both are bullish! 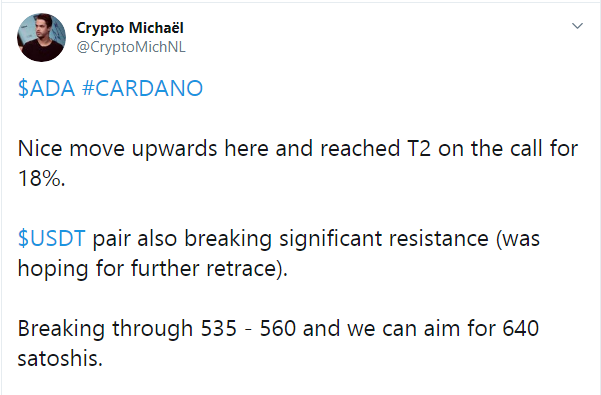 The last impressive rally of Cardano (ADA) occurred in March, 2019. Back then, the price of the altcoin gained almost 80% against a poor-performing Bitcoin (BTC). Also, Cardano (ADA) surged 24% just 5 days after the AdaPay solution was released in November, 2019.

It should be mentioned that Cardano (ADA) was named among the most undervalued digital assets by the prominent Weiss Crypto Ratings. This means that the price of ADA doesn't reflect the project's fundamentals.

By the way, Cardano managed to deliver some splendid market products in recent months. Besides AdaPay, we need to mention in a row, Shelley Testnet and Daedalus wallet.

Should we long ADA? Share your expertise in the Comments section below!