Bitcoin has long been associated with big swings in its price and value, making it a highly volatile asset or currency. However, in light of recent events in Turkey, which have seen the value of the Lira drop rapidly, Bitcoin is now technically more stable than a government issued currency.

The skyrocketing of the Lira’s volatility is indicative of problems within the nation’s border as the local population loses faith in the monetary system. This has also seen the Turkish people look more towards other sources of exchange, such as digital currencies.

The 10-day swings in the Lira relative to the US dollar now exceed those for Bitcoin amid Turkey’s escalating currency crisis that has peaked thanks to a war of words between Washington and Ankara. 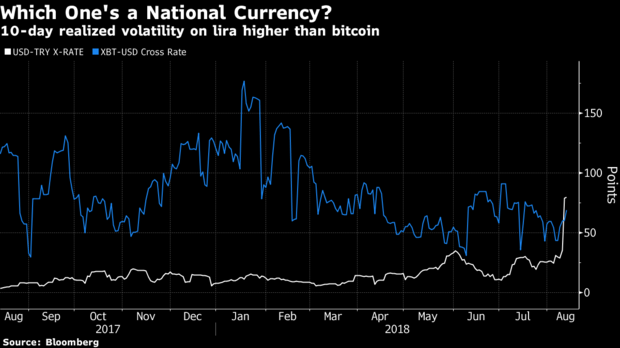 The decline in the Lira, and the subsequent move towards other forms of exchange, have seen the Turkish Lira spike in volatility to a position where it even exceeds the famously volatile Bitcoin.

It has often been seen since Bitcoin has taken off that the digital decentralized currency flourishes in times of economic strife. In Zimbabwe, Venezuela, and other nations suffering politically and economically, there has been an influx in trading volumes for digital currencies.

This appears to be the case again in Turkey as the geopolitical turmoil drives citizens to safer, and ironically, less volatile modes of exchanges- such as Bitcoin.

$484.7 Mln in Bitcoin (BTC) Pushed by Bittrex Through Anonymous Wallets