After the flagship currency surged over the $9,000 threshold on January 28, traders are expecting the BTC price to keep appreciating, however, some still believe that Bitcoin may reverse and hit the bottom.

A prominent crypto trader Eric Choe, aka Mr. Swing Trade, believes that the next target for Bitcoin will be the $12,500 level.

‘Possible moon mission in the making’

Eric Choe, who works with analysis based on Elliot Waves, has shared a chart which shows that Bitcoin is on its way to reaching a higher level in the short term. Bullish on BTC, the trader names the $12,500 area. 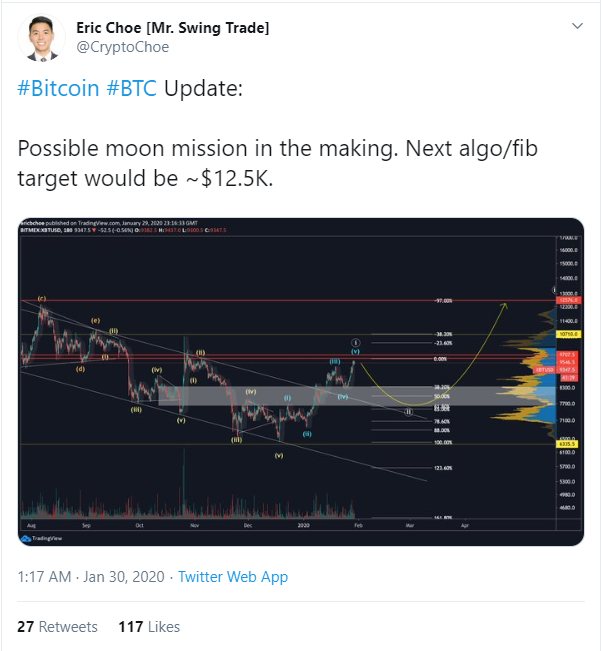 ‘The bottom for BTC has been in’

In his recent tweet, crypto trader @BTC_Macro addresses those who believe Bitcoin has not reached the bottom yet and may still plunge as low as $1,000.

He insists that, as per the charts, the bottom of the Bitcoin price is well behind us already and it has been obvious for months now.

Sure, maybe the bottom isn't in yet.

However, as a trader I prefer reality - and it's been obvious for MONTHS now that the bottom has been in.

Trade what you see, not what you think!

Bullish on Bitcoin, as always

The trader known as ‘CryptoWolf’ has shared a Bitcoin chart with a price curve that starts in 2011. As per requests from his followers, on it he shows where he believes the market is at the moment compared to previous years.

As per the current state of things, he reckons that currently Bitcoin is coming out of the Falling Edge pattern and is heading North. 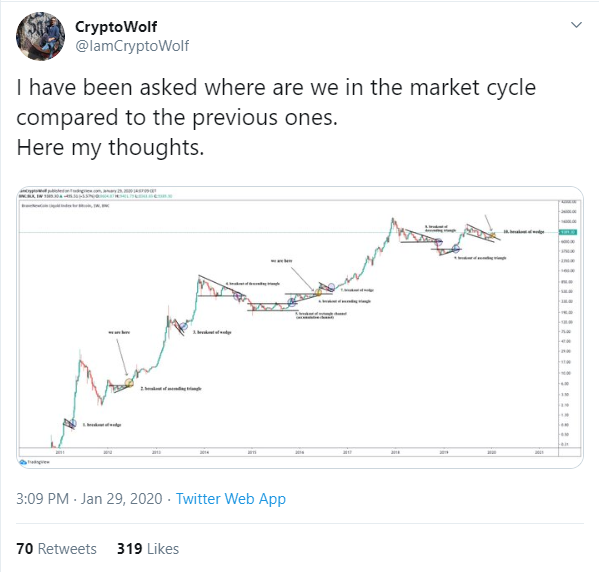 As reported by U.Today on Wednesday, Fundstrat’s expert Tom Lee stated that since Bitcoin is now above the DMA 200 line, the major crypto has now officially entered a new bullish trend.