Bitcoin (BTC) Price Is Expected to Surpass $100,000 in Five Years by Some Financial Advisors

According to this year's Bitwise survey, four percent of US-based financial advisors expect the Bitcoin price to skyrocket above the $100,000 mark over the next few years. However, the majority of all survey participants believe that the leading cryptocurrency will be trading in the $7,000-$24,999 range.

Must Read
Is Bitcoin Halving Priced In? Grayscale Publishes Results of Its Survey - READ MORE

From hero to zero

About five percent of all responders predicted that the BTC price would witness at least a ten-fold increase. However, while some are incredibly bullish on Bitcoin, there are also those advisors who don't believe that it will be able to survive during the next five years.

In fact, eight percent of all them are certain that the price of Bitcoin is going to zero within the next five years. 10 percent also predicted that BTC would plunge below the $1,000 level over the aforementioned period of time.

On a positive note, there are significantly fewer permabears among the top financial advisors in the US. As Blockchain Capital's Spencer Bogart points out, 14 percent of them insisted that BTC would tank to zero last year.

Only 8% of financial advisors expect Bitcoin to go to zero (down from 14% last year).

The Bitwise survey reveals that a whopping 64 percent of advisors would choose an exchange-traded fund (ETF) in order to invest in crypto. Only 16 percent of all participants would opt for direct ownership of crypto. The US Securities and Exchange Commission (SEC) is yet to approve a Bitcoin ETF after rejecting at least a bunch of proposals.

Notably, Bitwise withdrew its very own ETF application shortly after publishing this research.

Another sticking point is the lack of regulatory clarity in the US. 58 percent of all advisors would feel "more comfortable" about allocating their assets to Bitcoin with better regulations.

It is the first day of another month – this means that Ripple has lavishly thrown XRP from its escrow wallet – one billion coins. Since the start of 2020, this monthly dragon-sized amount was withdrawn in two portions of 500 mln XRP each. 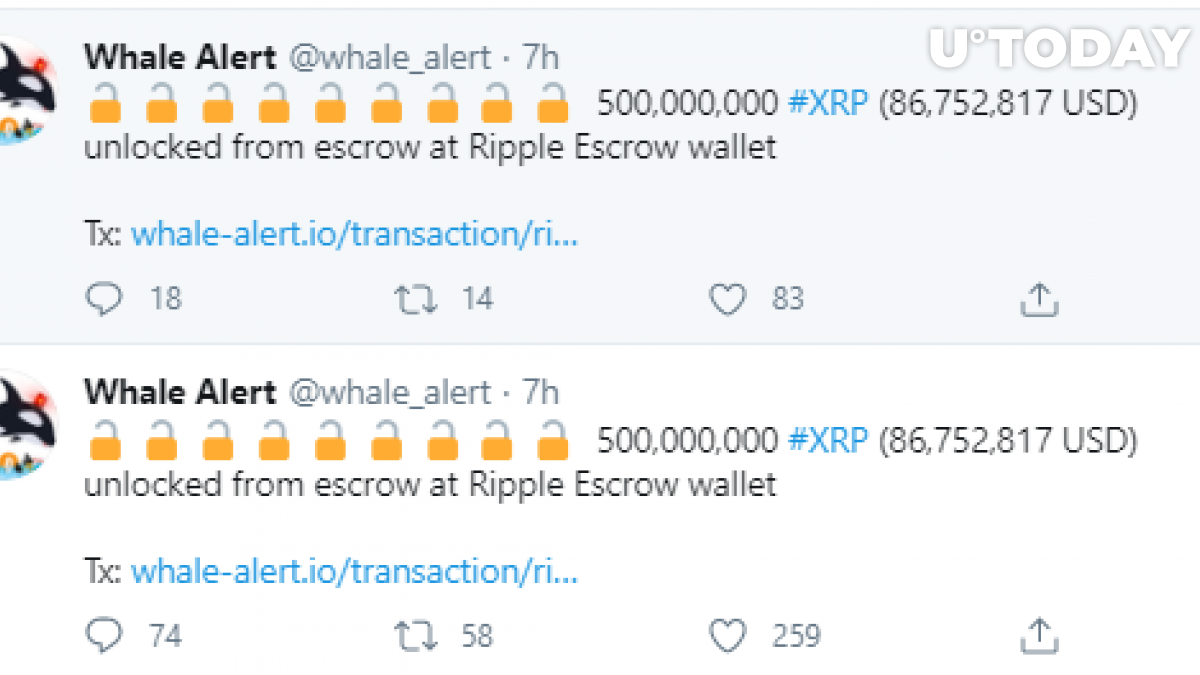 While the XRP price is in the green zone, trading at $0.173095 on CoinMarketCap, the comments under the tweets about the XRP release signify that the community is either indifferent (having got used to these releases already) or is expecting another price drop in the short term.

In January 2018, XRP, the third-largest cryptocurrency, reached an all-time high of nearly $3. Since then, XRP has been light years away from the ATH.

Many skeptics say that the XRP price is not going to rise even in the long term, mocking those who remain faithful, holding bags of the coin.

And you are still holding it.

As earlier reported by U.Today, many in the community believe that regular XRP releases made by Ripple prevent the price from rising and reaching at least $1. In 2019, a petition was set up on Change.org by crypto influencer ‘Crypto_Bitlord’ who wanted Ripple to stop dumping XRP.

Curiously, later on, another petition appeared on the same platform, requesting Ripple to accelerate the release of XRP in order to increase the coin’s adoption, which would assumingly lead to a massive price surge.