While the crypto community hopes that within a short period after the approaching Bitcoin halving the BTC price will start reclaiming the 2017 high of nearly $20,000. VanEck’s crypto chief Gabor Gurbacs states that the most sustainably traded all-time high for Bitcoin is now - $10,000.

Meanwhile, interest in Bitcoin seems to be awakening even for those individuals that were disappointed by it after the crypto winter arrived in early 2018. The TechCrunch founder says, friends have started asking him whether they should now start buying BTC again.

‘Bitcoin today is at a tradable ATH’

Gabor Gurbacs, the digital asset strategist at VanEck and Bitcoin advocate, has taken to Twitter to share with the community his take on the current situation with Bitcoin. Gurbacs believes that, at the moment, the BTC price is at its best for trading and currently has strong fundamentals, he adds.

An image with other Bitcoin highs that Gurbacs has posted confirms this statement, showing that BTC traded at the $18,000 - $19,000 levels just for 3 minutes, as per this table. 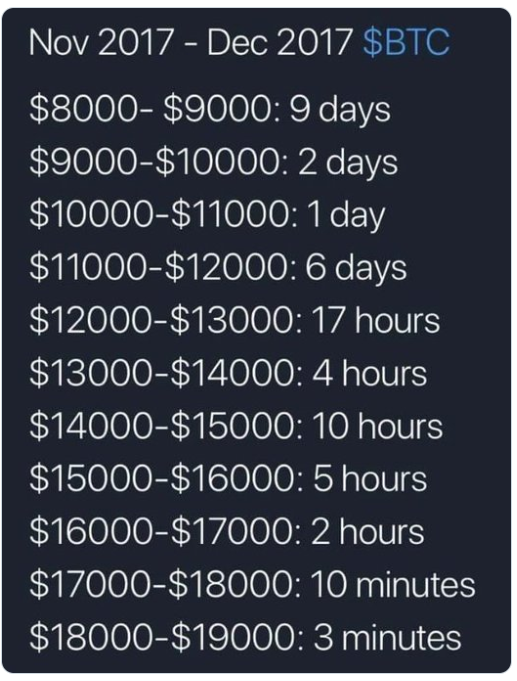 Bitcoin is drawing the attention of the disappointed ones

The founder of TechCrunch, Michael Arrington, has shared with his followers that his friends who have been disappointed in Bitcoin since 2018 have started asking him for advice – whether they should now again buy Bitcoin and how to go about it.

Friends who studiously avoided talking about crypto the last two years are now again asking me if they should buy BTC and how to do it.

Now, that the Bitcoin price has crossed the threshold of $10,000, many have turned bullish and started considering Bitcoin as a worthy investment again. The BTC trading price at press-time is $10,131, as per CoinMarketCap.

As earlier reported by U.Today, the former CTO of the Coinbase exchange, Balaji S. Srinivasan, believes that, after surpassing the $10,000 level, it will be easier for BTC to surge towards $100,000.