Fear of missing out, or FOMO, is a kind of social anxiety characterized by the desire to continuously stay connected with what others are doing. For the newbies of crypto markets, this feeling may result in ill-conceived buying. Crypto trader Michael van de Poppe is sure on when the next wave of FOMO may occur.

Mr. van de Poppe predicts that the $10,000 level for Bitcoin (BTC) will result in journalists having to write about Bitcoin. In turn, this may cause a huge FOMO reaction. 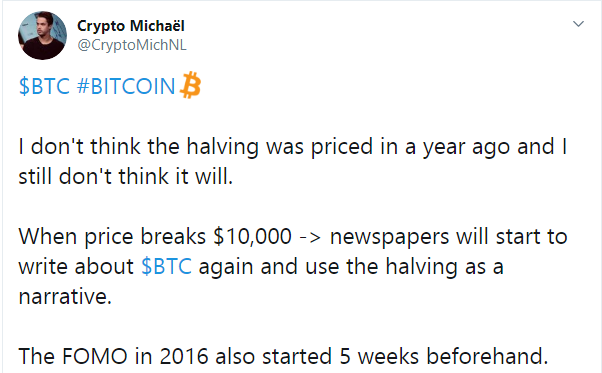 Not only will the Bitcoin halving will affect the price, but it will also act as a narrative used by the media to attract the attention readers. It may result in pre-halving euphoria and the possibility of a bull rally.

Mr. van de Poppe also recalled that in 2016, prior to the second Bitcoin (BTC) halving, a similar process started only five weeks beforehand. In terms of the upcoming halving event, this period will start in the early days of April, 2020.

Is It Priced In?

Mr. van de Poppe insists that the halving isn't priced in, and probably won't be. This means that the market hasn't incorporated the data about possible Bitcoin price moves attributed to the halving.

Must Read
Tuur Demeester: Bitcoin (BTC) Halving is Not Priced In, Here's The Proof - READ MORE

Tuur Demeester, a top-tier investor, analyst, and founding partner of Adamant Capital, agrees with Mr. van de Poppe on this situation. He uses the Google Trends statistics to prove that investors are apathetic about this major event in blockchain world.