Binance’s Exponential Rise Up the Ranks an Impressive Cryptocurrency Feat 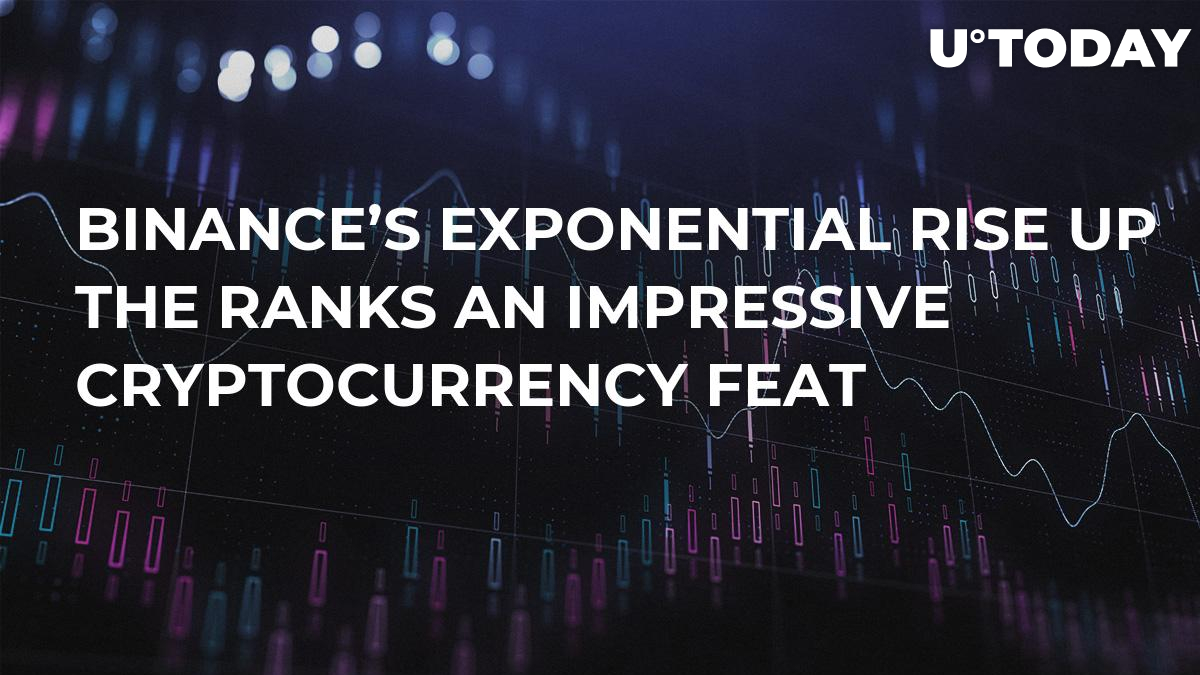 But what is it that has made this exchange such a success, especially in a bear market, and especially in a cryptocurrency space that has become so saturated and competitive in regards to exchanges?

The exchange started out on the right foot, with an innovative idea and a well-timed ICO for the Binance Coin (BNB) but from there, the growth of the company has been aided by its solid foundation. This in itself has allowed Biance to innovate and expand to new areas, including upcoming fiat-to-crypto exchanges.

It is a worthwhile exercise to look at Binance’s route to the top and discover if there is anything for other companies in the market to glean from their journey. In such a competitive market, there have to be competitors that are either looking to innovate, or potentially imitate.

Rocketing to the top

Binance was founded in early 2017 by Changpeng Zhao in China. They quickly moved to launch an ICO for a native utility token called the BNB. This was a timeous decision as July 2017 was when the ICO craze was really starting to take off and it ended up netting Binance $15 mln.

The intention with the BNB was to give its holders 50% off fees on the trading platform, which was an attractive proposition and surely one of the reasons why Binance accumulated so many users so quickly, but also why it’s token became important and embedded down the line.

It took Binance just 143 days from its launch to reach the top three cryptocurrency exchanges globally, and its growth did not slow down. At the beginning of 2018, the exchange boasted about 2 million users, but six months into this year that number swelled to 10 million.

It is for all of these reasons and this astronomical growth, that Binance is predicting its profits to top $1 bln this year.

Binance’s own token has surely been key to its growth as a company, but at the same time, the companies growth has also helped establish and expand the use of the utility token. Because it started out simply as a way in which users could lessen their fees, it was well received and attractive to new users.

The BNB thus was heavily traded, very liquid, and well distributed, all aspects that aid and help grow an exchange. Thus, as more people flocked to Binance because of the lessened fees through its token, the company grew, and the BNB expanded its reach and value.

BNB is now more than just a coupon for 50 percent, it has multiple roles on Binance, including being a voting token for Community Coin of The Month which is a way new coins can be chosen and listed on Binance, and it is being used for Binance’s LaunchPad, which aims to help raise funds for worthwhile start-ups.

A model for the future?

Binance is of course not without its faults, and it has been criticised for onboarding a number of cryptocurrencies, and also accused of charging exorbitant rates for doing so as a money making scheme to the determined of the ecosystem.

However, their story of growth — even in a quickly expanding space like Blockchain — is still impressive, and may well be setting a precedent for future exchanges to become established. Binance will face struggles down the line, especially with regards to regulation, and this is why it has already moved operations to Malta, but its foundation is already laid.