The Whale Alert Twitter bot has brought to the public attention another staggering XRP transaction made inside a cryptocurrency exchange – Bithumb.

Bithumb moves its XRP as the coin soars in price

32 mln XRP (that’s $8,911,094) has been transferred from one wallet to another. The transaction was made as Ripple’s XRP surged over 11 percent in price. The price surge coincided with news reports about Ripple’s partner MoneyGram partnering with International Money Express, Inc. (Intermex) – a remittance giant, working in Mexico and the Caribbean.

At the time of writing, the third largest coin is trading at $0.2787, taking another step towards the $0.30 level. Many investors in the community have been looking forward to XRP regaining this psychological level, hoping that afterwards, the price will surge on.

Another Twitter account, similar to Whale Alert but watching only transactions on the XRP Ledger, has detected two transactions of 10 mln XRP each made by Ripple Foundation a few hours ago. 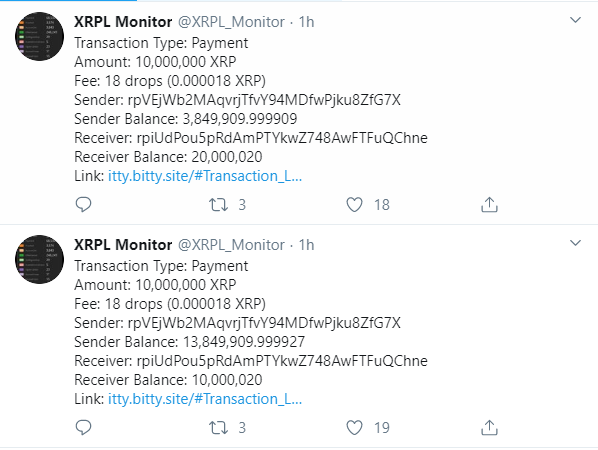 Ripple Foundation is a charity affiliated with Ripple and its co-founder Chris Larsen. In November last year, a Messari report came out, stating that the foundation is possibly being used by Ripple as a tax shelter.

“What the company is doing with its affiliated foundation may actually be worse, though: using that vehicle as a corporate and executive tax shelter; not dispensing grants to charities (that would actually lead to XRP sales from its treasury and depress the price for company and insider liquidations!); and ultimately obfuscating the fact that 2.2 billion XRP it counts as “circulating supply” is currently locked in long-term restricted selling agreements.”